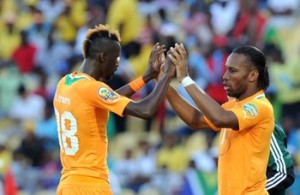 With Didier Drogba and Samuel Eto’o – for so long the icons of African football – now meandering through the twilight phases of their respective careers, there are growing concerns regarding a lack viable candidates to take over the responsibility as Continental flag bearers.

YaYa Toure is undoubtedly now Africa’s gold standard – as three consecutive African footballer of the year titles vindicate – and arguably his specific achievements earn him a pedestal beside Drogba and Eto’o, however now the wrong side of 30 the Manchester City man is not getting any younger – which only heightens anxiety relating to who will take up the mantle.

At this point it is also worth mentioning another fading star in the form of Michael Essein – whilst he may lack the x-factor qualities of Drogba and Eto’o, at his peak the Ghanaian was undeniably amongst the pinnacle of midfield players. Essein’s demise over recent years only adds a further pair of sizeable African shoes that have vacated world football’s top table.

There is a school of thought that the continent has been spoilt in possessing the luxury of four genuinely world class players in a relatively short timeframe, given that in the preceding years African presence at the highest apexes of the game was relatively scarce.

A scan through the winners of the African footballer of the year crown prior to the emergence of the golden quintet – who since 2003 have only twice not made up two of the top three – laments that viewpoint with the likes of El Hadji Diouf, Patrick Mboma and Mustapha Hadji having lifted the trophy in the preceding years – all individuals of significant stature but some distance short of being inside the world class bracket. Before those individuals there was of course George Weah – one Africa’s all-time greats – but the handful of worldwide superstars the continent has been able to vaunt through the last decade represents an unrivalled talent glut.

A shrinking of that superstar talent pool at least in the short term appears inevitability, however analysis of the Champions League qualifiers from Europe’s perceived top five leagues – England, Spain, France, Germany and Italy –makes depressing reading in relation to African representation.

Only YaYa made a telling contribution on the Premier League’s top four – with Demba Ba and Jon Obi Mikel enduring mere bit part roles at Stamford Bridge – similarly in the Bundesliga Pierre-Emerick Aubameyang was the sole African to have a noteworthy season amongst the league’s elite clubs. The situation in Spain was further disheartening with African influence on the top four virtually non-existent, at the same for all the African talent based in Ligue 1 neither PSG nor AS Monaco – the eventual top two – achieved their success with significant African involvement.

Serie A did however offer reason for encouragement with Kwadwo Asamoah growing to be an integral competent at Juventus, whilst both Gervinho and Mehdi Benatia played starring roles in Roma’s resurgence.

For all the bemoaning of a lack of African presence in the Champions League, conversely the number of African players carrying out their trade in Europe’s top leagues has never been higher. Further to that it is also widely believed that in terms of both quality and depth the African game has never been healthier – the highly competitive nature of both the African Cup of Nations from qualification through to the actual finals being vindication of that.

Although a famine of truly world class African talent is imminent – an inevitably given the personnel Africa has been blessed with in recent history – the aspiration will be that it will only be a matter of time before the next generation of superstars emerge given Africa’s growing immersion in Europe’s top leagues.

Numerous individuals have threatened to take over the mantles being vacated by Eto’o and co, yet for varying reasons have not quite hit the anticipated heights – Asamoah Gyan, Andrew Ayew, Alex Song and Mikel the most notable individuals to fulfil such criteria. The most curious and exasperating of those cases is Gyan and in many ways labelling him in this category is overly harsh – given his status Africa’s all-time leading World Cup goal-scorer – however such is the Al Ain man’s abundant talent that there is a nagging feeling his status could have been extended yet further were it not for questionable career move to the Middle East back in 2011.

Encouragingly there is no shortage of players possessing the credentials to become Africa’s future gold standard performers. Algerian duo Yacine Brahimi and Sofiane Feghouli both excelled in Brazil, with the former of that pair adding to an ever-growing reputation – it is surely only a matter of time before Feghouli entices one of Europe’s elite clubs.

An impressive world cup earnt Serge Aurier a move to PSG and at just 21 he vaunts the attributes to become on the world’s best fullbacks, something which can also be labelled at Chelsea winger Mohamed Salah provided his development is handled with care.

Should Wilfried Bony and Vincent Aboubakar build on superb goal scoring campaigns last time out – with Swansea and Lorient respectively – then both will prove difficult for their clubs to retain.

There are numerous others worthy of mention, for instance although a late bloomer Benatia is now one of the world’s most sought after centre backs, Gabon’s Pierre-Emerick Aubameyang should only improve on a solid debut Bundesliga showing with Dortmund and finally at 24 it is still conceivable that Ayew will live up to the early hype.

It would be unrealistic and futile to burden anybody with the task of filling the void left by the continent’s current soon to be departed icons; nevertheless Africa does possess a promising clutch of individuals who have the capability to become pivotal performers on the grandest stages.

There are of course no guarantees that potential will be fully utilised and even if a small selection of those individuals do go on to reach the games pinnacles, unavoidably African football – at least in the short term – will be hit by the loss of some of its most distinguished names.

There are also external issues on the horizon – the primary one being the consistent utilisation of secondary nationality and ancestry to unearth talent. There is a concern that for all the benefits this tactic can bring, it can also hamper the development of players born and raised on the continent – given that there is a perception of rather investing in youth systems it is easier for national bodies to scour Europe for eligible personnel.The perceived worry is that with these individuals supposedly being Europe’s castoffs, their potential to develop into players of the very highest standard is nominal – although to contradict that viewpoint Benatia and Feghouli are just two of many top quality Africans born in Europe.

The likes Eto’o and Drogba and simply do not come around with regularity and naturally their absence will be felt hard on a continent in which they are revered – Africa can only hope that the next generation will go some way to easing the impending transition period.