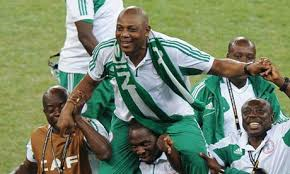 Saturday’s penultimate round of qualification fixtures saw Tunisia, South Africa, Cameroon, Senegal, Burkina Faso, Gabon and Zambia all book their tickets to January’s showpiece – joining Algeria and Cape Verde who were already in the luxurious position of having negotiated their passage to Equatorial Guinea.

However, for those vying for the remaining six slots at Africa’s premier competition, an anxiety doused final date awaits.

Nigeria are one of those nations still sweating in regards to securing their spot in December’s draw, although a pivotal victory in Ponte-Noire has seen those stresses ease considerably.

At the halfway point and beset by off field problems – the most prominent being the ludicrous long running saga surrounding the future of coach Stephen Keshi – the potential ignominy of the defending champions missing the competition was a genuine possibility, with a return of just a single point allowing Nigeria little room for manoeuvre.

The workmanlike performance in Congo did little to discredit those questioning Keshi’s future, yet considering the external forces acting upon their campaign the overriding emotion in Nigeria must surely be one of relief that the situation is now back in their hands.

That being said there remains substantial reason to be tentative given a relatively toothless Nigeria are still liable to require victory over a South Africa side who have conceded just a single goal throughout qualification in order to be certain of qualification.

In the same group Congo – who at one stage had a qualification berth seemingly within their grasp are now targeting a route in via the backdoor – with victory over Sudan in Khartoum certain to assure them at least the title of best third place finisher. Acquiring such a result is more than within Congo limitations, yet questions hang surrounding their mental fortitude in such scenarios with the manner in which they have fallen away through this process vindication of those struggles.

On Friday afternoon Ivory Coast swung the tide considerably in what has developed into a troublesome bid to reach a sixth consecutive finals, with a thumping of Sierra Leone leaving the Elephants needing just a point to avert the threat of Herve Renard’s much anticipated rein concluding in unthinkable failure.

A resurgent although already qualified Cameroon are however hardly ideal opposition in their quest to gain that point, particularly accounting that Renard’s side continue to be plagued by defensive blunders.

Ready to pounce on any potential stumble are DR Congo, with the Leopards facing a dispirited Sierra Leone in Kinshasa – even if Ivory Coast do meet their anticipated qualification requirements, victory in that fixture could yet see DR Congo steal in as qualification’s lucky loser.

Group E has been one characterised by inconsistency and that is reflected by the four nations being separated by just two points. Ghana top the table, however Avram Grant endured a desperate inception with a defeat in Uganda on Saturday doing little to appease the general feeling of disenchantment surrounding Ghanaian football currently – that viewpoint being born out of their chaotic World Cup campaign.

The black stars still remain favourites to top the table, with a point at home to Togo enough for them to progress. The Togolese have cut an outfit of exasperation throughout the process, with a duo of opening defeats being preceded by back to back conquerings of a buoyant Uganda, before falling to a head scratching home mauling at the hands of Guinea.

Guinea and Uganda will meet in Casablanca on Wednesday in what likely represents a do or die clash to make the finals. For both progression would represent the culmination of compelling stories, with Uganda currently enduring a 36 year exile from Africa’s premier tournament whilst Guinea as a knock-on of Ebola have been devoid of home advantage.

The fixtures promises a skirmish between Uganda’s compactability and Guinea’s attacking verve, however given the stakes the outcome could well reside on who is better equipped to navigate the high pressure occasion.

The final automatic qualification spot will be decided in group B, where Mali, Malawi and Ethiopia are all vying for a voyage to Equatorial Guinea. Mali had appeared destined to join Algeria in qualifying from the group, however back to back defeats to both Ethiopia and Malawi in which their typical robustness deserted them means they are now in danger of missing the cut.

The eagles – third in the previous two tournaments – must now gain something from Algeria’s visit to Bamako if they are to at least temporarily deter a grow sense of decline. Realistically Ethiopia require both an inconceivable swing in goal difference and Mali defeat to sneak in, whilst a point for Mali would leave Malawi needing a momentous victory in Addis Ababa to seal what would be a hugely unexpected qualification.

Recreating the vibrant display which saw them down Mali in Blantyre on Saturday would make that a genuinely possibility, although as ever with Malawi doubts reside regarding their viability on the road.

Egypt, Mozambique and Angola all currently occupy spots in the last chance saloon, with their only avenue into the tournament being the possibility of clamouring to the summit of the third place table. For all three that situation appears improbable, meaning for Egypt the inconceivable possibility of missing three straight tournaments becoming reality.

5 thoughts on “African Cup of Nations qualification – the final frontier”