Appiah lives to fight another day 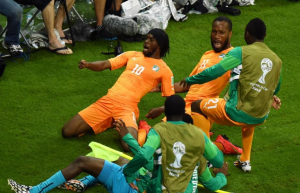 An abject display against Uganda infront of an already apoplectic Ghanaian public did little to curb the mounting pressure of Kwesi Appiah, so much so that Wednesday’s trip to Togo might have spelt the end for the under fire coach.

As it was Ghana scrambled to a 3-2 success – in the process recording their first win since a disgraced showing in Brazil – although even accounting for that much needed success the tide has far from turned for the pressurised Appiah. The coach is considered heavily responsible for Ghana’s disenchanting World Cup – which included player bust ups and an embarrassing bonus saga – whilst questions also reside regarding his tactical nous.

Having been handed a lifeline due to Rwanda’s ejection from the competition – courtesy of fielding an ineligible player – Claude le Roy’s Congo are fully embracing their second chance.

A vulnerable Nigeria – Stephen Keshi’s prolonged contract fiasco amongst certain other external factors being a significant hindrance to the Super Eagles – presented an opening for the red devils and it was not spurned, with Congo recording an historic win in Calabar – their first victory in Nigeria since 1981.

That unprecedented triumph was then cemented by a routine success over Sudan; a result which leaves Congo firmly on course to complete a remarkable resurrection mission.

Having gone through the World Cup qualification process without the benefit of home advantage – a flare up of violence in a fixture against Ivory Coast back in 2012 being the reason for that ban – Friday represented Senegal’s Dakar return.

The Teranga Lions have – in spite of rich resources – persistently struggled to mould their extensive parts into a functioning unit, yet infront of raucous crowd there were glimpses of Senegal’s vast potential being utilised. Dame N’Doye was the orchestrator to Egypt’s downfall – the Lokomotiv Moscow man pulling the strings to success – whilst Mame Diouf and new Southampton boy Saido Mane offered a consistent outlet.

The rapturous homecoming was followed up by a victory in Botswana which leaves the West African well placed to claim a spot in Morocco – where they would represent a substantial danger to Africa’s elite.

Only Tunisia can vaunt a longer run of consecutive AFCON qualifications than Angola – although Ghana, Ivory Coast and Zambia can all match their five showings on the spin – nonetheless early indications suggest the Sable Antelopes prestigious run could be nearing an end.

An opening defeat in Gabon could in the long run prove critical – its liable the panthers will dual with the Angolans for second spot – whilst a resounding home defeat at the hands of group favourites Burkina Faso – their first defeat on home soil in 15 years – has left Angola precariously placed.

Goals remain the fundamental problem with Angola yet to score – that following a return of just seven strikes in six World Cup qualifiers. A double header with Lesotho in October offers hope, nevertheless the crocodiles have already proven a resolute unit – coming within moments of a momentous victory over Gabon.

Africa’s dominant power throughout the bulk of the 21st century, Egypt now resemble a pale imitation of the nation who lifted three AFCON titles between 2006 and 2010.

Problems back home have inevitably taken a toll on footballing fortunes, at the same time the squad which made Egypt Africa’s gold standard have now all but dispersed – those factors cumulating in consecutive AFCON qualification failures.

Offering comfort is that a new generation of potential stars are at least approaching on the horizon – success at the most recent African Under-20 championship evidence that the future does not need to be bleak – nevertheless with those youngsters still establishing themselves the Pharaohs have been left in a state of flux.

In an already arduous group, CAF’s decision to force Sierra Leone to seek alternative venues for their home fixtures was always likely to prove terminally detrimental.

After extended futile searching DR Congo offered that the pair’s fixture be played out in Lubumbashi – far from an ideal situation for John McKinstry’s men but a proposal they could not turn down. For DR Congo That meant the critical advantages of no time being spent in transition or adapting to conditions, given the stadium was the same as that utilised for their weekend fixture with Cameroon.

The Leone Stars by contrast endured a near 7,000Km transition, which makes their demise in Lubumbashi far from surprising. That defeat coupled with a brave but ultimately futile showing in Ivory Coast means already Sierra Leone – who are currently enjoying a rankings peak – look destined to miss out on scripting a fairy tale voyage to Morocco.

A 4-1 mauling at the hands of reinvigorated Cameroon presented Herve Renard with a rude awakening of the rebuilding mission he has been tasked with stewarding.

Having dominated the continent in recent history – without earning the accolades to match – the elephants now face a changeover period as old established heads are gradually moved on – this week’s action representing the Ivoirians first assignment without the iconic Didier Drogba. Arguably however it is defensively where Renard will lose most sleep after an exasperating showing Yaoundé.

Qualification should still be achieved – coming from behind to beat Sierra Leone on Saturday afternoon now appears a crucial turnaround accounting for event in Cameroon – nonetheless Ivory Coast are gradually falling from the apex of African football.

Absent from Africa’s premier competition since 1978, aspirations are growing that Uganda might be set to end that prolonged exile.

A draw in Ghana – in which the cranes were undoubtedly the superior side – signified Uganda’s credentials; however it was the win over Guinea – their likely rivals for second spot providing Ghana regain their stride and clinch to spot – which is so significant to Uganda’s prospects.

With Guinea missing home advantage – again as a knock on of Ebola – the Ugandans now hold the eight ball, with fellow qualification hopefuls Togo already falling behind the pace following consecutive defeats.