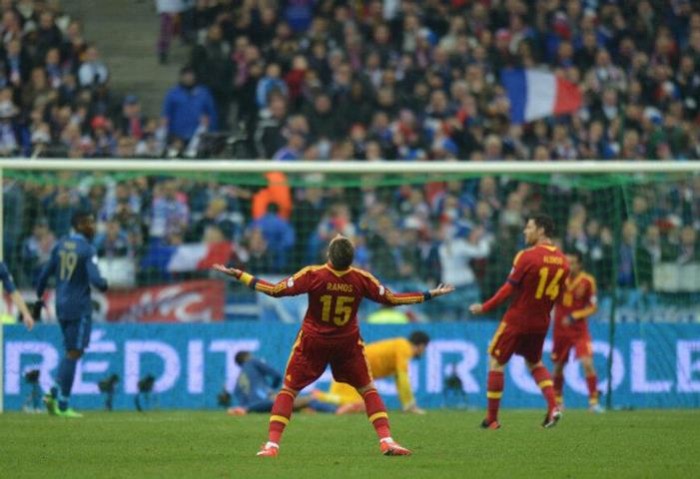 Brazil 3-0 Spain. And the hyperbole begins. In the fickle world of football, Spain’s vice-like grip over international football loosened on the last Sunday of June, now over a week ago, as they were comfortably beaten by the powerful and hard-working Brazilians in the final of the Confederations Cup.

It’s true, on the night, Spain were out-classed and – most crucially – out-battled in front of a packed, passionate and hostile Maracana. The Brazilians, adopting the high pressing tactics that have become synonymous with their counterparts, didn’t allow the Spaniards to settle and get any kind of foothold in the game. Spain’s talismanic pair of Iniesta and Xavi were shut down by the aggressive and physical duo of Paulinho and Luiz Gustavo, while Neymar and Fred did the critical damage in front of goal. It was perhaps one of the best Brazil performances for many years, and as good as Brazil were, Spain were as poor; the combination, in addition to timely goals, meant that Brazil triumphed in emphatic style and hysteria ensued. In the fickle world of football, Spain’s golden era had come to a crashing and abrupt end.

In the real world, it would be absurd to talk of Spain’s era ending so soon, and incredibly naive to suggest so on the back of one poor performance – especially when you consider Spain played 120 minutes with Italy, only two nights prior to the match against Brazil. But even if you discount that fact – some might say excuse – the strength of Spanish football goes far beyond this ‘golden generation’ of players. By delving beyond the realms of Spain’s senior team, you will notice that colossal talents like Andre Iniesta, Xavi Hernandez, Cesc Fabregas and David Villa all coming along at roughly the same time is by no means a touch of good fortune. The fact that another batch of young players are following in the footsteps of the aforementioned names, suggests that the reason for Spain’s success is anything but coincidence.

As Iker Casillas and Xavi pointed out in 2011, a key aspect of Spain’s success is down to each generation of players rising through the youth ranks together. The pair first played together for Spain in the Under-17 World Cup in Egypt, back in 1997, where they reached the semi-finals. Victories in the Under-20 World Cup, European Under-21s and a silver medal at the 2000 Olympics followed for the ‘golden generation’. Unlike in England, where club managers object to senior players participating in age group football, in Spain, the strength of the national team is a priority. Youth tournaments are taken seriously; they are seen as crucial in aiding the development of a winning mentality and binding a group of players together. If you didn’t know who won this year’s European Championship in Israel, the answer is – unsurprisingly – Spain. They won it four years prior, too. In the words of Xavi, “success breeds success.”

Incredibly, in a team that included already established house-hold names – such as Thiago Alcantara, David De Gea and Isco – not one single player born after 1993 was included in their squad that triumphed in Israel. Why? Because they wanted to make sure their squad for the Under-20 World Cup was as strong as possible.

But the emergence of generation upon generation of special talent doesn’t simply just happen. Impeccable planning, top class coaching and patience are necessary building blocks in developing these talented groups of players. Ultimately, the architects behind Spain’s success have been the Spanish Football Federation (the RFEF) for implementing a system and creating an environment that would allow these players to emerge and thrive in.

In Spain, all age-groups, from under-15s to under-21s, are coached to play in the same style as the first team. Core training methods are all ball-orientated and focused on improving passing, receiving, dribbling, shooting, heading and sliding. Without the ball, players are trained to develop particular abilities, such as running into space, pressing, marking, covering and creating overloads (see Jed Davies’ exceptional piece on overloads here). Little to no attention is paid to physique; players are primarily evaluated on talent, technical ability and their understanding of the game.

Anyone who has seen any of the Spanish youth sides play will notice that the excellence of their passing, the patience of their build-up play, and their desire to press and hunt in packs, when not in possession, mirrors that of the national first team. It is an identity that has been consistently applied for over two decades, since the game-changing youth coaching system was put in place in the early 1990s.

Each age-group is managed by the same coaching team – the likes of Julen Lopetegui, Gines Melendez, Santi Denia, Albert Celades, Luis de la Fuente and David Gordo – who work with each generation to implement the Spanish football philosophy. For example, the manager of the under-17s will also be a coach for the under-21s, and vice versa.

The approach to coaching in Spain is very similar to the Dutch philosophy, where focus on educating youngsters in the tactical methodology of the first team starts from a very early age. At Barcelona, for example, tactical training begins in the pre-Benjami age-group (ages 7-8). Logically, it is foreseen that, by the time players advance through the age groups, and special talents break into the first team, it is of great advantage to the first team that the players coming in already know the system like the back of their hands. The focus in Spain is very much on the collective structure rather than on individualism. If a player is absent, there is always another player who can come in and fit the system seamlessly.

But breaking into the first team is tough and competition is high. At Barcelona’s famous La Masia – a product of 30 years worth of hard work and influenced heavily by Holland’s ‘total football’ icon Johan Cruyff – very few survive from season to season. For the period of the 2011/12 season, 256 players were handled by the club. During the summer of 2011, the club released 82 players and recruited 80 new potential starlets, meaning roughly a third of the club changes every year. Incredibly, those 80 recruited players were selected from a pool of 4,763 trialists and other players from various linked development centres; therefore, just over 1% of trialists were selected to join La Masia. Competition is fierce throughout the club and only the crème de la crème are chosen, and even fewer ever break into the Barcelona first team.

It is the same way at other clubs in Spain. For example, Atletico Madrid have a great number of youth sides. To be precise, they have three under-19 teams (one each for players born in 1994, 95 and 96), twelve under-16 teams, fourteen under-14 and under-12 teams, twenty under-10 teams and ten under-8 teams. These all include federative schools and foundations set up all around the country dedicated to finding talent.

But even the best coaching in the world is worthless, if the young players don’t apply the right attitude to begin with. A conscious effort is made to keep players humble and grounded, and loyalty is a value that holds great importance. It is inconceivable for Spanish clubs to offer their best talents six-figure contracts. A youngster playing for Barcelona B in the Segunda division could easily triple his wages if he moved abroad – and occasionally players do – but the majority have the willingness to stick it out, in the hope that one day they will follow in the footsteps of the likes of Xavi and Iniesta.

And that is exactly what is happening. As witnessed with the under-21s this summer, a new batch of Spanish stars are well on their way to emulating those who went before them. The reality is that the making of another golden generation is as a direct result of foundations put in place 20 years ago. The rest of football is playing catch up; one disappointing defeat to Brazil doesn’t change that.

Credit must go to Billy Edwards (@billyedwards94) and Jed Davies (@TPiMBW) for being so kind in sharing with me their knowledge of Spanish football. Without their help, it would have made this piece far harder to write.

One thought on “Adios Spain? Not for the next decade – at the very least”