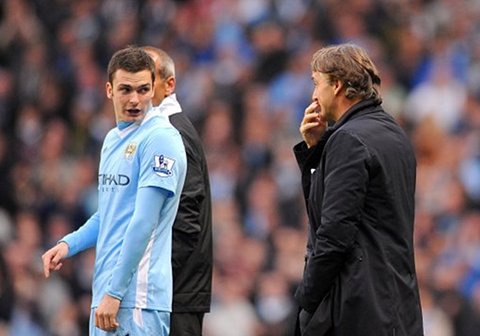 Is Adam Johnson one of the most underrated and unappreciated players in the Premier League?

The Manchester City winger has never been a regular since signing from Middlesbrough in 2010, mainly due to City’s depth of attacking options and Roberto Mancini’s belief that Johnson is inconsistent.

At 25 years old I believe Adam Johnson needs to be provided with the platform from which to demonstrate his obvious ability. On the rare occasions that he has been afforded the chance to prove his worth Johnson has shone and whilst he occasionally flatters to deceive it is my opinion that there are inferior wingers playing regularly at the top of the game both domestically and internationally

It is difficult for a winger coming in and out of a team to establish any form of consistency, yet Johnson still managed 9 goals in 25 appearances for club and country last season, despite 20 of his appearances coming from the bench.  That poses questions as to why he is not thought more of from the management at Eastlands and also at international level, the statistics suggest Johnson delivers even when used sporadically, so why is he so unloved?

His mazy runs on the right wing, his ability to go inside or outside a defender, and his prowess at cutting inside and firing in shots make him a nightmare to contain. Playing in a similar style to that of Arjen Robben, Johnson is match-made for the 4-2-3-1 formation, being afforded a license to go forward and express himself, interchanging with forward players in a fluid system off the right hand side with his favoured left foot.

Sometimes I get the impression that Johnson is a victim of being a normal lad born in Sunderland, if his name was Johnsinho and he were to have arrived from Brazil instead of Middlesbrough, would he be thought of more highly? Would his increased reputation result in more first team chances? I think so, I also think that his relatively low reputation makes him easy to leave out, there was no media clamour for his inclusion in the England squad, but I think their should have been.

With Liverpool eyeing Johnson as part of the deal to take Daniel Agger to City I can’t think of a more ideal player for Liverpool to acquire this transfer window.

If you are looking for a winger to be direct, beat players, create goals and score goals, I believe that Adam Johnson can provide all four if given the opportunity to have an extended run in a team that will give him freedom on the right wing.

I sincerely hope that Mancini provides him with this opportunity in what is a pivotal season for his career. However if Brendan Rogers is able to entice him to Anfield – and there’s no guarantee he will want to sign for the Reds – then it would represent a magnificent signing and one that could potentially take Liverpool to a higher level.

Thinking back to Euro 2012 and England’s relatively average and uninspiring performances I can’t help but think what Adam Johnson would have provided. It is a crying shame that a player with a touch of arrogance and belief in his ability was left at home, his confidence in retaining the ball and going past defenders is something that was badly missing from England’s play, but once again Johnson was over looked in favour of a more robotic and honest approach that left England with little creativity and invention.

Sometimes players just need to be given an opportunity, this is the case for Johnson, the 2012-2013 season is a huge one for the man from the North-East, he has too much ability to go to waste and Mancini needn’t look abroad for a wide-man to score and provide, he already possesses it in his ranks and it comes in the form of the man who rarely started last year.

As a follower of a team operating outside England’s top flight in the new season I only have a few wishes for the forthcoming Premier League campaign, one being the desire to see the potential of a terrific English footballer fulfilled.

Underrated and unappreciated, the time has come for a manager to remove the shackles from one of the most naturally gifted England wingers I have seen in the last ten years, it’s time for Johnson to have his day in the sun, so give him a go Mancini, or it will be nineteen Premier League left backs who will be the most appreciative.