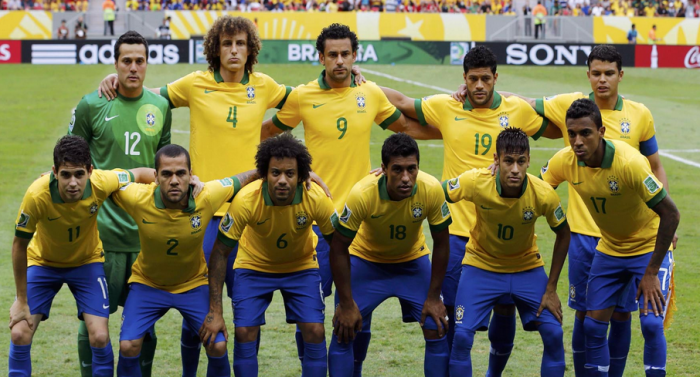 The players and staff from either camp agreed, Julio Cesar’s leap to his left to parry away Diego Forlan’s penalty played a big part in swinging the pendulum of the match in Brazil’s favour. But that alone wasn’t the sole match-winning factor in the home nation’s high-pressure 2-1 win over neighbours Uruguay, which secured their passage to tonight’s Confederations Cup final.

Catching his breath shortly after the final whistle, their divisive but efficient coach Luis Felipe Scolari confessed, “It was the fans who pulled us to the winning post.”

He was right – one had only to observe the reaction of crowd in Belo Horizonte to the introduction of exciting midfielder Bernard in the 64th minute to appreciate the unique brand of energy that Brazil supporters are able transmit to the players on the pitch. And the fact that it was Bernard, the current star turn of the city’s premier club, Atletico Mineiro, exposes an important element for the host nation that should not be overlooked, with the World Cup beginning to beckon on the horizon, rather like the sun peeking teasingly above the Corcovado Mountain that towers over Rio de Janeiro 200 miles to the south.

The local boy representing the nation was the clear catalyst of the fans’ delight. This is why it is important Brazil have Brasileirao players to call upon. Especially for a tournament they are hosting.

Brazil have nine home-based players in their 23-man squad for this Confederations Cup – it would have been ten but for Neymar’s transfer to Barcelona weeks before the tournament began. Were they to keep the same group together for next summer, it would include more Brazil-based players than any Selecao World Cup squad since 2002 – which, if omens are your thing, was the last time they were under the leadership of Scolari and earned another star on their shirt.

The fact that only two World Cups separate the class of 2002 and 2014 may lessen impact of this, but not when you study the numbers. A sizable 13 players registered to Brazilian clubs made the trip to South Korea and Japan eleven years ago, compared to a paltry three to both Germany and South Africa. It is set to jump right back up next year.

There was some dissatisfaction among the Brazilian public with the current squad upon its announcement, with the conspicuous absences of stars such as Rafael Da Silva and Kaka who pundits believed, despite another year of limited playing time at Real Madrid, could have been a strong influence upon a new band of outfield players with the tender average age of 25 and a meagre total of six World Cup appearances between them – shared by Fred and Dani Alves.

When the main event swings around a year from now, minor alterations are expected – the inclusion of Chelsea’s Ramires, for one. But despite Scolari’s repeated insistence over the last fortnight that the World Cup represents Brazil’s principle aspiration, the Confederations Cup is certainly no idle distraction for him, no excuse to trial fringe players in the famous yellow and green.

It has been a crucial opportunity for the boss to do some serious planning – to identify, finalise and almost rubber-stamp the line-up that will lead Brazil’s charge next summer. An opportunity Scolari could not afford to pass up, given that Brazil hadn’t played a single competitive match in 23 months prior to their commanding 3-0 win over Japan in the opening game.

It may prove key that he continues to call upon domestic talent. Brazil’s fans remain notoriously demanding, but when each city sees its respective local heroes going toe-to-toe with the likes of Spain, as opposed to players who made the jump to Europe too early (in the way some hardened Argentines still view Lionel Messi), it alters their mentality. This nationwide pride is set to play a huge role for Brazil in their most significant of World Cup campaigns.

“We are putting together a group which is on the right track,” Scolari concluded in the wake of Wednesday night’s victory. In the mixed zone, left-back Marcelo asserted, “While we’ve been playing well in this competition, you have to remember that this side is only just coming together in many different areas.” So, you might take the view that Italy were in it for the planning, with their trials of formations and lesser-capped players. Spain have been in it purely for the glory. Brazil set out firmly focused on both, and are one game away from accomplishing their targets for the competition.

Several young players earned lucrative moves to Europe off the back of their glorious World Cup success in 2002 – Gilberto Silva and Juliano Belletti, both 25, crossed the Atlantic for Arsenal and Villarreal respectively, with 20-year old Kaka and the lesser-successful Kleberson joining them one year on. It remains to be seen how long it will be before the same lure entices the brightest of talents like Bernard among Brazil’s Class of 2014. Neymar’s already defected to the Europe-based contingent with one of the revelations of the tournament, Paulinho, ready to join him upon the completion of his £17m transfer to Tottenham.

Yet when Internacional’s Leandro Damiao dropped out with injury shortly before the start of this tournament, Scolari called upon another Atletico Mineiro man, Jo, to replace him, and has been repaid with two goals in 17 minutes of game time – proof that depth lies at home for the five-time World champions.

And that could prove a formidable virtue.

I have written for a range of football magazines, including Champions and the official Arsenal magazine, and currently freelance at the Match of the Day magazine.

One thought on “A stepping stone to Rio”