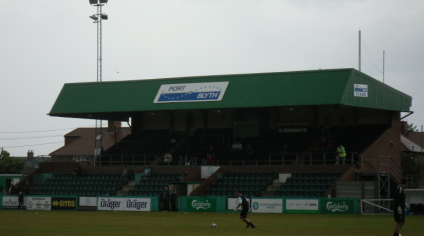 One of the most famous non-league F.A. Cup giantkillers, Blyth Spartans, are currently going through an unsettling period of turbulence in the club’s distinguished history. It comes as something of a fall from grace for the Northumbrians, who a mere four years ago were the leading non-league club in the North East and about to embark on a famous F.A. Cup adventure which would see them dispose of two lower league clubs and bring a Premier League giant to their Croft Park home.

For decades Blyth had been a staple dish on the Northern League scene being the dominant force throughout the seventies and eighties winning 10 championships between 1973 and 1988. It was during this time when they came to national prominence on their epic F.A. Cup run of 1977-78. Having taken care of Chesterfield and Stoke City in rounds three and four they were drawn away to Wrexham in the fifth round, earning a draw and a subsequent replay, held at Newcastle United’s St. James’ Park. A season high 42,167 turned out at the home of the Magpies to see the plucky Spartans go down 2-1 to their more lofty opponents. Their achievements of reaching the fifth round of the world’s oldest knockout competition have only been equalled three times since.

Fast forward to the early nineties and after 20 years of being the big fish in the small pond, Blyth finally took the step up the non-league ladder, eventually rising to the Unibond Premier League. After flirtation with bankruptcy and financial salvation from local businessmen including current chairman Tony Platten, the Green and Whites were about to embark on another period of success. In the 2005-06 season under the stewardship of the wily and experienced Harry Dunn, the Spartans went on an incredible run in the second half of the year to secure a thrilling League title win and elevation to the Club’s highest ever status in the non-league game, the Blue Square Bet North.

Cult hero Dunn, revered by Blyth’s passionate following, then led the team into the national spotlight once more in early 2009 when they dispatched league sides Shrewsbury Town and AFC Bournemouth in rounds one and two of the F.A.Cup before hosting Premier League giants Blackburn Rovers at a filled-to-bursting Croft Park. Respectably, Blyth held Sam Allardyce’s charges to a 1-0 defeat and in the process earned themselves the admiration of the football world and an estimated £400,000 worth of television money. A figure beyond the wildest dreams of a club of Blyth’s resources and previous dalliance with financial ruin.

This should have been the time for Blyth to kick on and make the most of their good fortune, but once the magic of the cup had ebbed away, the season descended into a relegation scrap which, although successfully avoided, cost the ever popular Harry Dunn his job, a move that divided the opinions of the supporters.

With money in the bank, the board set about making some ground improvements, prudently paying off debts and beginning to look at attracting a higher calibre of player to join the small town club on the Northumberland coast. Former manager Mick Tait was appointed to do this and after a sticky start he delivered good players, good football and Blyth’s highest ever league finish in 2010-11 when they came in 9th, having harboured brief hopes during the season of reaching the play-offs to reach the Blue Square Premier. But as with his predecessor, Tait fell foul of Chairman Platten and was shown the door and the team he assembled disintegrated. Tait’s replacement was the untried managerial rookie Steve Cuggy, a Blyth Spartans goalscoring hero from the early Nineties. With the pot of riches gloriously earned two years earlier now seemingly all gone, Cuggy was given a small budget to work with. Results and performances started badly and got rapidly worse and eventually with Spartans cut adrift at the bottom of the league and with the fans clamouring for Cuggy’s head for weeks previously, the Chairman’s axe was wielded once again.

Next through the revolving door was former Newcastle United and Northern Ireland midfielder Tommy Cassidy, an experienced and well travelled manager. Although results improved the miracle didn’t happen and Blyth Spartans finally suffered their first ever relegation in their 113 year history. With dwindling attendances and a further reduced budget for playing staff, Blyth started their EvoStick Premier League season inconsistently. Early promise and eye catching wins have given way to disappointing defeats and double exit from the qualifying rounds of the F.A. Cup and F.A. Trophy within three days of each other mean that Blyth will miss out on much needed revenue for the club and just as needed cheer for the Croft Park legions. The end result? Cassidy gone, and the search for a fifth manager in three years is on.

The fear now for Spartans fans must be that the heady days of the recent past, the cup run, the league titles will be gone, never to return. The coffers, swollen by the heroics of Harry Dunn’s men, are now empty. The pool of available playing talent is small, especially when you take into account the relatively small population of the area as a whole, and big spending Northern League teams and the even bigger spending Gateshead are able to push Blyth down the queue for signatures in the North East. Whoever comes into the hotseat next will have to have quite a few tricks up their sleeves, have just as many rabbits to pull out of hats and have the ability to dodge a few bullets from the boardroom to ensure Blyth Spartans don’t slip quietly from whence they came.