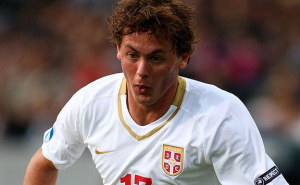 In the January transfer window of 2011, Chelsea Football Club secured two blockbuster signings by the names of David Luiz from Benifica and the ever polarizing Fernando Torres, from Liverpool. Since then, David Luiz has become the bedrock of the side’s defence and more recently midfield, while Torres has struggled to match his 50 million pound transfer fee.

With the excitement surrounding his transfer, it would be hard to blame fans who missed out on a young player moving away from Stamford Bridge as a make-weight for David Luiz’s plane ticket to London. That player was Nemanja Matić, then a relatively low profile player (worth about four million pounds) in Chelsea’s youth set up. A player from Serbia who at only 20 years old, traded English shores to hone his craft in the Portuguese first division.

Now at 25 years of age, Matić is a proven veteran in the heart of the Benifica midfield, solidifying his reputation as one of league’s best midfield generals with each passing game. In recent weeks, Jose Mourinho has supposedly shortlisted Matić as one of the key transfer targets this window. This writer believes that in choosing the Serbian, Chelsea could strengthen a weakening part of the Chelsea midfield, and potentially build a stronger one for years to come.

Chelsea and Benifica have long enjoyed satisfaction with their transfer dealings. Matić was one such success story who grew in stature at the Portuguese club, the fact that he is now worth 20-30 million, nearly 9 times his cost price would see him net a hefty profit for Benifica. This situation was similar to the sale of Ramires to Chelsea. The Brazilian powerhouse midfielder has since become an integral part of the Chelsea team, and arguably the best performer in centre midfield with the Club’s lack of capable substitutes.

Although the abundance of attacking midfield players at Chelsea is embarrassing (the likes of Juan Mata and De Bruyne on the bench), the club do lack options in center midfield, a key fulcrum of the team which Mourinho relies highly on. At Real Madrid, Mourinho had a dynamic and title-winning paring in work horse Sami Khedira, and creator Xabi Alonso. However, at Chelsea, Ramires remains his only reliable midfielder as Lampard/Essien approach the twilight of their careers while Mikel struggles for creative output. An exciting player that should have made his mark this season, Marco Van Ginkel (or Justin as the players fondly call him) is out injured for the entirety of the season. A reinforcement through the likes of Matić is important if Mourinho would want to sustain his title push.

Looking at Matić, we have a towering physical specimen, 6 foot 4 inch, and a versatile box to box midfielder who mirrors Ramires with his industrious play style. His energy and strength in tackles have seen him screen the Benifica defence admirably and Mourinho can look to him to perform the same role at Chelsea football club. While Ramires has a higher advantage in pace, Matić makes up for it with his defining strength and reading of the game, factors which make him an asset in both defence and attack. Most importantly, Matić, despite his “lumbering figure” possesses a deft touch as well as a decent passing range.

Although fans will still see a fair number of backwards or sideways passes as his range may not be as fantastic as the likes of Xabi Alonso’s, it is certainly more inventive than Mikel’s or Ramires. Given time to grow, one can expect him to begin pulling the strings in midfield in the seasons to come. In a way, Matić reminds many of Yaya Toure, a similar powerhouse midfielder who has taken the premier league by storm since his arrival from Barcelona. Although Yaya Toure is a proven performer, Matić has the same traits that could see him mirror Toure’s achievements.

For Nemanja Matić, a move now will be one filled with mixed feelings. As a young player coming through years ago, his failure to break in the main team was one that saw him traded away. Although that move was a blessing in disguise, seeing that he has now established himself in another league, a move back to Chelsea at this stage of his career is nevertheless a risk he will have to take to make a successful step up to the more competitive league.

Will he gain enough game time? or be shuffled to the bench when a more expensive marque signings come in? The future remains uncertain. However, for this writer at least, a move now in the January transfer window would in Matic’s best interests. Given the injuries in the squad, and a lack of depth in center midfield, Matić has every factor perfectly placed for him, to win over his manager and establish himself in center midfield over the second half of the season.

These were the same circumstances which saw Chelsea right back Cesar Azipilicueta, establish himself at right back last term. Although Mourinho’s arrival and Rafa Benitez’s exit has since relegated the Spanish right back to the bench as a deputy, the likely stability with Mourinho now at the helm, is an advantageous situation. After all, Matic’s industry and attitude are synonymous with the type of players Mourinho wants. Barring any injury or fall out, Matić is well poised to form a successful partnership with Ramires with Mourinho’s support.

The transfer window in January is always exciting periods, filled with high expectations, ecstasy and disappointment. Chelsea needs to reinforce their midfield to surpass title contenders Manchester City and Arsenal. While Matić may not be the single catalyst for Mourinho successful second reign, buying him is certainly a positive step in the right direction.