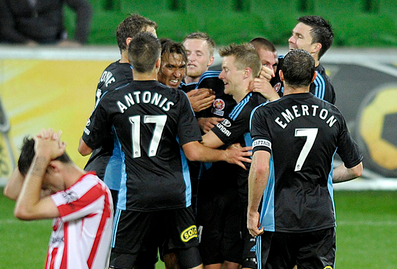 Things are hotting up in the A-League as last weekend threw up some fascinating results. The top two dropped points, others showed signs of improvement and the rest…well…it’s going to be a long season. Here are the talking points from the weekend.

1. Here come the Mariners. A good win against a good Wellington team shows that the Central Coast is ready to make an impact. Wellington is a better side than their 8th place in the table suggests. Expect more to come from both sides.

2. The Heart is in trouble. They are currently bottom of the table and deserve to be there. Scoring has been a major problem so as the transfer window shuts they address this by buying a…defender. As you do. It’s obvious common sense. Not surprisingly the Heart looked toothless in attack against an average Adelaide team in the 1-all draw. Melbourne’s attacking midfielder Fred made his comeback in this game.  Hopefully he can fire and get the side ticking over. The fear is that it’s too big a task for one man. But hey, they’ve got a new defender to help.

3. Newcastle look good, Perth revert to type. This match was a validation of this author’s comments in previous weeks.  Newcastle were predicted to improve their playing style under Gary Von Egmond and Perth were going to come unstuck as they rely too much on Shane Smeltz.  Sure enough, the Jets played a possession game and looked more assured than in previous weeks.  The Glory performance was reminiscent of last season’s efforts ie. Not good enough.

4. The Victory finally come good- and draw.  When does a draw seem like a win?  When you lose your keeper in the first minute to a red card, a second player goes for a not-so-malicious tackle, you manage to score two quality goals against the top side whilst defending stoutly. It was a magnificent rear guard action from the Melbourne Victory who should use this result as a springboard for better things. For the ladder leading Roar, it was the first points dropped.  They’re still four points clear and that unbeaten record remains intact. 33 games and still going strong.

5. The winner is Sydney. Sydney FC provided the comeback of the season after being two goals down to overcome a plucky Gold Coast United. The Coasters were well worth the win until Brett Emerton and Nick Carle conjured up some magic to inspire the sky blues to an unlikely comeback. A controversial last minute penalty from the “homie” referee completed the result. This was a quality game and augurs well for both teams.

To this weekend. Clubs are about to have the depth of their squads tested as players depart for internationals and Olympic qualifiers.

On Friday night it’s United versus United as Adelaide host the Gold Coast. There should be goals in this game as both teams really need a win to keep pace with the top six. The Dutch contingent is well represented in this match as Sergio Van Dijk and Maceo Rigters lead their respective forward lines.

On Saturday the Heart host the Jets. As mentioned earlier, watch for Fred to have a major impact in the Heart’s attack as they try to improve their fortunes.  The Victory travel to Bluetongue Stadium to take on the Mariners.  Harry Kewell will be on international duty so it will be interesting to see how Mehmet Durakovich shuffles his pack.  Matt Simon has scored 3 in 3 matches for the Central Coast who will probably suffer the most from Olyroo commitments.  Perth host Sydney in the match of the round. The Glory shouldn’t suffer too many casualties as a result of the international matches.  Meanwhile, Sydney is finding some form and although Brett Emerton was the catalyst for last weeks’ revival (and will be missing) the team as a whole are beginning to show improvement.

Sunday’s fixture has the Roar hosting Wellington. This promises to be a tricky game for Brisbane as they’ll be missing Mitch Nichols to the Socceroos.  Nichols has stepped up this season providing goals and assists for the league leaders. Wellington will be a stern test.