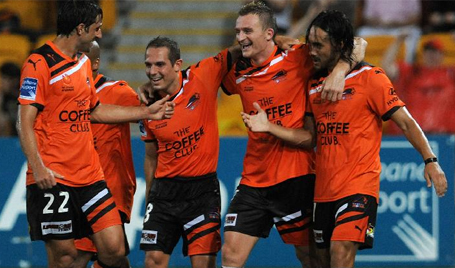 Drama, records and job uncertainty. The A-League is cooking along very nicely at the moment. Whilst perhaps the quality of the field play hasn’t reached the heights expected at the beginning of the season, there’s enough quality to entertain the masses. Here are the five talking points of week 8.

1. Brisbane Roar has the Australian record for competition matches without a loss.

36 matches undefeated. 99% of these matches were a joy to watch. 100% of these matches featured a Roar goal.  Brisbane set the record in style with a dominant 4-0 home win over Perth. Even with the stars away on international duty the back up players stepped up and showed that the playing system is what makes Brisbane successful. Sure there are some talented players in the squad, but one gets the feeling that Ange Postecoglou could take over any A-League team and make them successful. It’s the system, the pattern of play, the defensive organisation and the adherence to team principles. Brisbane Roar, take a bow. Well played.

2. Melbourne Victory may have won the battle but they are still losing the war

Last week they were 2-0 up and in control. They won 3-2 and finished with ten men. The win shows that while there is spirit in the camp, there are still many issues to be addressed.  The line-up is not settled, the tactics are all over the place and the performances have been spasmodic. A recent club restructure has seen the sacking of the Director of Football and management changes, but the real problem remains the coach. Mehmet Durakovic is new to the coaching lark. The biggest club in Australia needs better than a first timer. He needs to go, sharpish. Managers deserve time to set the team in their mould but unfortunately Durakovic doesn’t have a mould. There’s no pattern of play and the Victory are getting by on the talent of their squad.  Durakovic is a nice guy but this job is too much too soon. He should go and do his apprenticeship elsewhere.

United is a Shakespearean tragedy playing out every Friday night. Injuries and poor performances has seen the reds sliding down the ladder. A goalless draw against a transitioning Newcastle was a poor, poor game to watch and both teams are capable of so much more.

A stirring win over Sydney last week was the sort of result that can define a season. There’s a lot of talent in the team from across the ditch and they always fly under the radar. Paul Ifill is a very important player for the Phoenix and looks to be coming into a rich vein of form. If they can keep him on the field they should put a run together.

5. The Mariners move into second place

A quality team is about to hit its straps. No marquee player, no problem. There’s a spirit in the Central Coast that’s evident from the interaction of the players.  They were workmanlike in their win over the Heart. Their success is despite the slow start from wunderkid Mustafa Amini. Borussia Dortmund bought him in the off season and sent him back on loan.  It’s been the older heads that have seen them through which has been surprising as it’s their younger players that generate the hype.

Adelaide will lose to the travelling Central Coast on Friday night. You can put money on that. On Saturday, Newcastle will beat the travelling Melbourne Victory. You should put money on that. Following that game Perth host the Gold Coast.  Keep your money in your pocket for that one. The Gold Coast threaten to put a good result together but always contrive to somehow blow it.

On Sunday it’s the match of the round. The improving Melbourne Heart host the improving Wellington. Which team will prove their improvement is more improved? Good question. The Heart have some young players that are really impressing, but more on them in later weeks. Finally, Sydney play Brisbane in Illawarra. Obviously fitting 7000 fans in the 40,000 capacity Sydney Football Stadium has proved too embarrassing for the Blues so they’re off to take the game to the people. It’s a good move, although this is probably the sort of fixture that would generate a higher gate. They’re following this up with a game on Wednesday against Perth in Sydney’s western suburbs. This is another good move taking the game to the heartland of the Sydney football market. They need to win the battle of hearts and minds. Best of luck to them as it’s a battle worth winning.