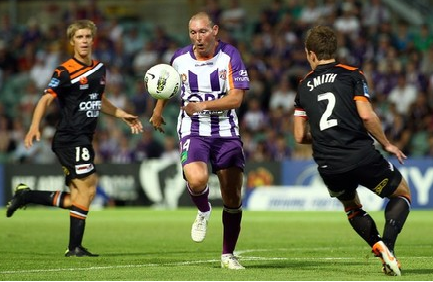 When you are hot you are hot.  The Musings predicted a Brisbane Roar – Perth Glory Grand Final two weeks ago.

Perth rode their luck to progress to their first A-League trophy opportunity. The Glory breezed past Wellington, then allowed the Central Coast managed to snatch defeat from the jaws of victory. Meanwhile, Brisbane won both legs of its tie against the Central Coast and enjoyed the weekend off.  Preparations were soured midweek with an Asian Champions League loss to Ulsan Hyundai effectively ending their chances to progress in that competition. It’s now just the Silver Dunny Seat to play for (The A-League trophy).

The game should be a sellout and 50,000 fans will be expecting Brisbane to go back to back after last season’s dramatic penalty shootout finish.  The Roar will go into the game as favourites and rightly so. Ange Postecoglou has added some key players to his squad which has added a different dimension to their play. Berisha Besart is the most noticeable of these.  The passionate Albanian has dominated the goal scoring charts scoring 19 goals. He is the ultimate poacher. All of his goals were scored inside the box and probably a third of those within six yards. As a defender he runs tirelessly continually putting pressure on the backline forcing turnovers and rushed passes.

Then there is Johnny Warren medallist Thomas Broich. He and Henrique have the quality to bust a game open from wide positions.  Erik Paartalu provides the midfield steel whilst Mohamed Adnan and Matthew Smith provide the defensive foundations. The Roar’s short passing possession game has been a little hit-and-miss this season, but when they are in the groove they are the dominant force in the league.

Perth Glory is an enigma.  The Musings has not enjoyed watching them this season. At all. They have won games this season they’ve had no right to win. Yet here they are.  After a belting start the side lost both form and composure.  Ill discipline and red cards resulted in the Glory sliding down the ladder and out of the top six.  But then something happened. The Musings credits Jacob Burns with turning the season around. His form in the second half of the season has been sensational. He provided the steel that has allowed the other players around him to flourish.  He’s even scored the odd screamer. Earlier in the season he was getting carded for missing tackles and indiscipline.  Later in the season he’s been making the hard tackles, dictating the pace of the midfield and setting up attacks.

There are some great finishers in the Western Australian outfit. In Shane Smeltz the Glory has the ultimate predatory goalscorer. In Liam Miller they have a player with great quality and ability. In Travis Dodd they have a player with the pace and trickery to get past players and produce winning moments. And, in Bas Van Der Brink they have a defender that gets the job done and can mix things up bringing the ball out of defence when required.

The teams have played each other three times already this season. Brisbane has won two and drawn one. 4-0 and 3-0 and a three all draw suggests that there will be goals, lots of them. Brisbane will dominate possession, of that there is no doubt. Perth will scramble and rely on individual brilliance to capitalise on the few opportunities presented.

Here are the keys to victory for both sides:

If Brisbane can pass the ball at a high tempo and penetrate they should be able to break through- regularly.

If Perth can break up the Brisbane passing game they will create chances.

If Perth can feed Miller and Smeltz with quality opportunities they should be able to score.  They should also take advantage of their aerial presence.  Set pieces could be crucial.

If Brisbane can recover from a lack lustre midweek performance and fitness they should be able to compete with a physical Perth side and win before it goes to extra time. Extra time could be a concern, particularly after the disadvantage of the midweek game.

Brisbane has been the dominant force in Australia over the past two seasons.  This match should reinforce that domination. Expect Brisbane to come out of the blocks strongly and set up the game in the first 60 minutes before Perth mount a belated comeback.  Brisbane to win 3-1.