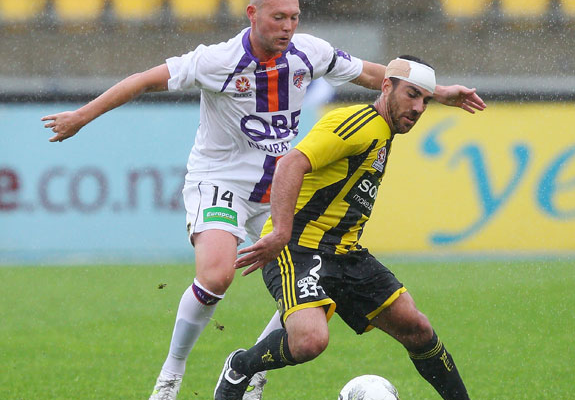 At the beginning of the season the Musings published an article saying that eight out of ten managers in the A-League are idiots.  The argument was that last season Brisbane Roar and Central Coast Mariners had raised the bar in terms of playing style.

After the first week it was evident that the other eight teams had not responded in kind despite having the luxury of a six month off-season with which to improve their teams.  The article was well and truly vindicated as the Mariners and Roar finished the regular season first and second respectively.

Of those eight idiots, there are only two of them that will be in the same job next season. Ian Ferguson guided the Perth Glory to third place and Ricki Herbert took the Wellington Phoenix to fourth.  The other two clubs that made up the finals places, Melbourne Heart and Sydney FC, had managers that left their clubs by mutual consent.  The rest got the sack.

The first week of the finals yielded few surprises. Wellington Phoenix saw off a spirited comeback to defeat Sydney FC 3-2. Despite being dominant for most of the game, Wellington let in two soft goals before securing a penalty which saw them over the line.  There’s a fantastic spirit about Wellington that is evident on and off the pitch. They now face what is probably the longest away trip in world football.

Wellington will travel across the Tasman Sea to the opposite side of Australia.  5257 kilometres is the journey to Perth where the Glory awaits. Perth was clinical in despatching Melbourne Heart 3-0 with Shane Smeltz completing a hat trick. They don’t play sexy football but the key to the Glory’s success is how clinical they are in front of goal. The efficiency with which Perth turn chances into goals is the best in the league.  They have also been industrious in defence keeping plenty of clean sheets in the second half of the season. Bas Van Der Brink is the key in the heart of defence. Sometimes erratic and ungainly, the blonde headed Dutchman is not afraid to get forward and assist attacks but when a tackle needs to be made, he’s generally the player in the right place at the right time.

Perth will be favourites for this game and the Musings expects them to get through to the preliminary final. Their opponent for that game appears to be Central Coast Mariners after they went down 2-0 to Brisbane Roar in the first leg of the Major Semi-Final. However, the second leg is at Bluetongue Stadium. The Mariners were at home in the Asian Champions League on Tuesday night whilst Brisbane faced a tough away trip to Korea on the Wednesday, and played the second half of that game with ten men. Fatigue will definitely be a factor. Despite this, the Musings fancies Brisbane to secure an away goal and do enough to qualify to host the Grand Final.

Should this occur the following week the Mariners would host the Glory to determine the second Grand Final place. The Musings actually fancies Perth to run over the top of Central Coast. Perth is the form team of the competition whilst the Mariners are not the same team they were at the mid-point of the season.  The sale of Royston Griffiths and Matt Simon significantly weakened Central Coast and although Tom Rogic has been an excellent acquisition they don’t have the current momentum of the Glory.  They’ll also have to endure a difficult Champions league game midweek whilst the Glory will be fresh. This is all of course a crystal ball prediction and anything could happen between now and then.

The four best teams in the league are facing off. The final Musings instalment for this season will be the Grand Final preview.