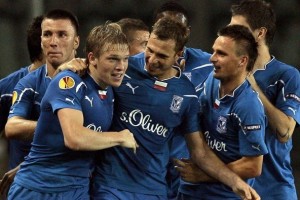 For the average Polish football fan, there has been little to no reason to celebrate for about the past two years.  An extremely disappointing qualifying campaign for the World Cup ended in a long summer vacation for the Polish camp.  A new coach arrived and the national team is in the early stages of a so far painful rebuilding project, highlighted by the 0:6 loss to Spain in June.  The club stage does not offer much respite for this football mad nation.  With a drought of 14 years without a Polish team in the Champions League, the norm is for most of our club teams to stumble out of continental competition  in one of the qualifying rounds in August.

Cue Lech Poznan removing their business suit this fall to reveal a Superman costume underneath.  When Sparta Prague knocked the Polish champions out of Champions League qualifying, parachuting them in to a Europa League playoff, it seemed the story would play out the way it always does.  Instead, the Poznan outfit secured a solid two-legged victory over mega-rich Ukrainian side Dnipro Dnipropetrovsk (unclear whether that is a real word) which propelled them in to the group stages of the ever increasingly competitive tournament.  The draw for the competition was equally attractive for Lech as they would face the historic Juventus, the uberloaded Manchester City, and the uh…energy drink sponsored in Red Bull Salzburg.  Most reviews on the internet said that Poznan will merely make up the numbers as Juve and Man City battle for top spot.

Along came September 16th, and what will go down as a heroic draw in Lech’s European history.  After just 32 minutes, IN TURIN, the Poles were leading 2:0 thanks to goals to their Latvian addition Artjoms Rudnevs.  Juventus fought back, partly due to slack defending and poor goalkeeping, and respectfully one thunderbolt from some Alessandro Del Piero guy.  To the delight of Lech fans everywhere, and soccer fans in Poland, Rudnevs summoned some Latvian magic in the 92nd minute and scored an absolute screamer to steal a point back from Italy.  Of course, the question remained whether this was a one-off performance, and whether Lech would still compete against the other two teams.

This Thursday, the answer came in the form of a resounding 2:0 home win over Red Bull Salzburg.  Playing for the first time in their renovated stadium in front of 42,000 absolutely maniacal fans (seismographs are being placed in older buildings near the stadium due to heavy shaking…seriously), Lech did not disappoint.  After a sub-par first half, Kolejorz came out and dominated the second half, getting goals from Manuel Arboleda, who celebrated with a fitting tribute to Shakira’s ‘Waka Waka’ and Slawomir Peszko.  It seems fitting that they wear a Polish flag patch on the middle of their chests, as this team now has the pride of a country’s club football on it’s back.  Only two games is not enough to say that they will advance out of this group, especially with two matches against Manchester City still to play, but Lech have given Polish soccer fans something to finally be proud of on a continental scale.  Top of Group A in the Europa League feels pretty good right now.

One thought on “A Bright Spot for Polish Football”