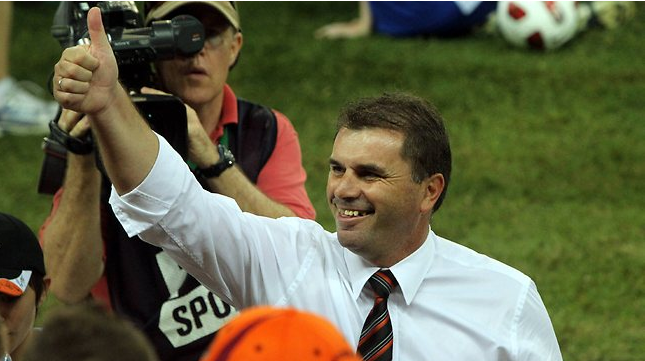 What would you do?

Put yourself in the shoes of an A-League manager at the end of last season. You’ve got a good team but despite the evenness of the squads you weren’t good enough to make the big dance.  There are two teams ahead of you: Central Coast Mariners and Brisbane Roar. The Central Coast is a brilliant counter-attacking team that’s compact in defence, with a hard working midfield and plenty of pace and quality up front.  Tactically, they are very smart. However, the benchmark team is Brisbane. The Roar set a new record for consecutive matches without defeat (28, now 29) and dominate the league with the quality of its play. Again, neither of these teams have an abundance of great players compared to your team. They are just tactically superior. With this in mind, what steps would you take to improve your teams fortunes for this season?

Let’s look at this further and in particular the Champion Brisbane Roar team just to let you know what you’re up against. They are Barcelona-esque in approach. Their focus is on short passing, a flawless offside trap, tactical awareness and maintaining possession. The team has its philosophy and doesn’t waver from it. For example, in last season’s Grand Final, Brisbane was a goal down in extra time with two minutes left on the clock. The Central Coast had turned over possession and the keeper had the ball. Most sides would expect the keeper to boot the ball forward and take pot luck on a lucky bounce.  But no, the Roar stuck to its principles. The ball was rolled to a defender, got short passed up the field and through great movement were able to work a corner. They scored from the corner and then won the ensuing penalty shootout. Impressive stuff.

There’s even more.  The coach of the team was appointed was on the comeback trail after being lambasted in public for failing with the national youth teams. Here’s the proof.  With a tattered reputation Ange Postecoglou took it on the chin. He went away, upgraded his coaching badges and after a stint in the Victorian State League returned to the big time with the Roar.  His playing philosophy transformed the traditionally underperforming Queenslanders into the team to beat. The bar had been raised.

So back to you. This is what you are dealing with. You’ve got a seven month off-season to set your plan into place. What would you do? Would you upgrade your team? Get some quality talent in and improve your playing stock? Not a bad idea. You’ve also got a salary cap to deal with and the club isn’t flush with funds so there’s only so much you can do.

Melbourne Victory took the improved player route. Good for them. Those players are going to have to be at their best when they play Brisbane because individual skill is the only way they can hurt them. If they don’t succeed it will be a very expensive mistake.

The better option is to fight fire with fire. Do some coaching badges. Improve your knowledge. Adopt a similar tactical approach that would allow you to compete with the best team in the land. You’d adapt the tactics to your team of course but you’d be improving yourself and your team, without breaking the club budget. I’m guessing this is what you’d do. You’re a smart person.