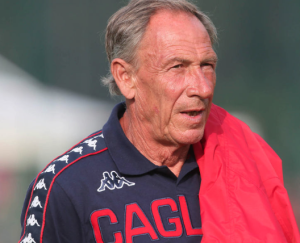 Since the World Cup came to its conclusion I have been waiting for this moment. It was a wait that seemed to last forever, but now the wait is over and Serie A returns on Saturday afternoon.

The season will be kicked off with reigning champions Juventus as they make the trip to Verona to face Chievo.

With this in mind, I have put together a quick list of five things to watch in Serie A this season.

1. Cagliari and Zdenek Zeman’s return to Serie A

The Czech-Italian is more than a football coach, he is a modern day football philosopher as well. With Cagliari this season, he is making a return to coaching in Serie A just over a year after he was dismissed by Roma, ironically enough, after a defeat to the club he manages this time around.

The 67-year-old is a huge advocate of attacking and care-free football and has never been too bothered by the concept of defending. His tactics have not always proved to be the most successful, mainly as they are so high-risk, but one thing is guaranteed and that is that any neutral tuning in to watch Cagliari play this season will have a whale of a time. His high-tempo, high-pressing and high-risk tactics would have the most attack minded football fan craving some defensive cover. Zeman’s style can be easily summed up in three words: “Attack, attack, attack.”

Don’t believe me? Read this quote from the man himself.

If you score 90 goals then it shouldn’t really worry you how many are conceded.

They will more than likely find themselves in a relegation battle come the end of the season, and Zeman may well have been relieved of his duties by then, but I urge you to enjoy it while it lasts and try to see Cagliari play a couple of times as the season unfolds.

If you are a fan of attacking football then the game of the weekend will be on Sunday evening as Cagliari make the trip to the mainland to play Sassuolo; a club coached by Eusebio Di Francesc0 – a well known disciple of Zeman and his philosophies. As both clubs take the mentality that “if you score four, we’ll score five,” this game is sure to be a cracker. That being said, it will almost definitely be a 0-0 now.

Want to read more about Zeman? I put together his top ten quotes here.

2. Roma and their Scudetto challenge

The Giallorossi had a phenomenal campaign last season and caught a lot of people by surprise in doing so. It was Rudi Garcia’s first season in charge at the Olimpico and nobody really expected his philosophies to be taken on by the players with so much effect in such a short space of time.

Finishing the season with a total of 85 points, this would have been enough to see them win the Scudetto ten times since the turn of the millennium and they were only eclipsed by the highest points total ever achieved in Serie A as Antonio Conte’s Juve surpassed 100 points for the first time.

This season Roma will feel that they can really challenge. Conte is gone, the Old Lady will be primarily focusing on the Champions League, and the capital club have added strength in depth to their side with some very good summer signings. Ashley Cole brings a winning mentality to the group, something which very few of the squad have.

The recent loss of Mehdi Benatia will hurt, no doubt, but not as much as you would initially think. They have added players to their defensive ranks in the form of Davide Astori from Cagliari and Kostas Manolas from Olympiacos as well as the aforementioned Cole.

Juan Iturbe’s arrival from Verona is an exciting one, as he was impressive for Hellas last season. The arrivals of Seydou Keita and Salih Ucan add extra depth and competition for the midfield positions, not to mention the securing of Radja Nainggolan on a permanent basis.

The question remains whether or not they will be able to balance the demands of European and domestic football, but with Juve also facing this challenge with their eyes set more on European success, I think it is Roma’s Scudetto this year.

3. The fight for Europe

Rafa Benítez and Napoli will be most people’s favourites to claim the place, but Europa League football might prove a hindrance to them as they look to be competitive in Serie A.

Another team who will be hotly tipped for the position is Fiorentina. La Viola have a real problem in their attacking department however and any success they are to have relies on the fitness of Mario Gomez and the brittle knees of Giuseppe Rossi; the latter has already shown his fitness issues as he will miss the season opener against Roma due to a recurring knee problem.

As much as I hate the term, Inter could well be dark horses to snatch third place this season and I have been very impressed with their transfer dealings. They have bought sensibly, and relatively cheaply as they looked to add strength to their squad. The arrivals of Nemanja Vidić, Yann M’Vila and Gary Medel will prove important, with Pablo Osvaldo being the main questionable one as he comes in from Southampton via Juventus. Erick Thohir looks to be allowing coach Walter Mazzarri the time he needs to build the team he wants and another San Siro club probably would have sacked the 52-year-old before now.

4. Juventus’ transition from Conte to Allegri 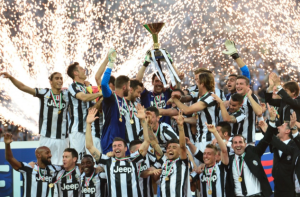 After a record breaking season last year, bridges appear to have been burned between Antonio Conte and the Juventus board as
he left the club as they began pre-season only to see the arrival of Massimiliano Allegri – to the dismay of a lot of Juventini.

The Bianconeri have gone about their business in a quiet manner this summer as far as incoming transfers are concerned. Their more impressive singings have been Patrice Evra from Manchester United, Romulo from Verona and even Álvaro Morata from Real Madrid, who have all come in without making too much of a splash on the Serie A transfer scene.

As far as outgoing transfers are concerned, however, talk of Arturo Vidal and Paul Pogba leaving this summer has been hard to avoid. The Vidal ‘saga’ will likely continue until the transfer window closes with Manchester United looking more desperate than ever to bring in some world class talent.

The admiration the Juve players and fans had for Conte was evident; Andrea Pirlo spoke extremely highly of him in his autobiography, so you would have to think that losing him is a bigger blow than if they were to lose any of their players.

Allegri has a huge challenge ahead of him this season and although I rate him higher than most seem to, one can’t deny that he will have his work cut out for him if he is to prove a successful successor to the man affectionately known as il capitano.

I am what you would call a kit nerd. I find myself getting excited about the smallest detail of any kit. For example, the variation of stripe width on the latest Milan home shirt drove me crazy, and not in a bad way. I love it.

With this in mind, Serie A has a range of wonderful kits on display this year. From simple, classy, elegant designs to some more unique creations, it is a league to watch for any kit nerds out there like me.

Personal highlights are both Roma kits as well as Parma and Genoa’s respective away shirts.

It probably won’t be the most exciting season in the history of Serie A, but there are absolutely some wonderful elements to get excited about, starting with Sassuolo vs Cagliari this Sunday evening.