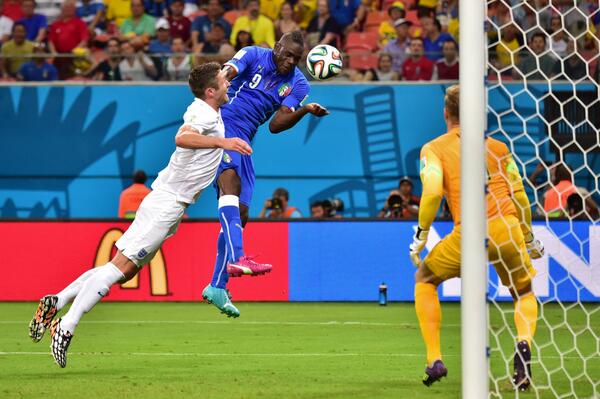 Over 30 degrees Celsius and 52% humidity in Manaus at kick-off time made for extremely difficult conditions for both sets of players on Saturday night.

It is to Italy and England’s credit that their opening World Cup 2014 fixture turned out to be such an entertaining encounter full of goalscoring opportunities, last ditch defending and superb individual displays from the likes of Sterling, Sturridge, Pirlo, Candreva and Darmian.

So what did we learn from Manaus apart from the fact England Physio Gary Lewin should refrain from getting involved in any future goal celebrations?

The England manager’s positivity certainly rubbed off on his players who counter-attacked to good effect for much of an entertaining game.

Unfortunately, for all their determined efforts the same old issues – reminiscent of previous tournaments – returned to haunt the English. Impressive approach play, excellent work rate and maintaining their shape were eventually trumped by better quality opposition.

There was only ever going to be one result once it got to 2-1 and England were asked to chase the game in humid conditions.

Still, there are plenty positives to take into the Uruguay and Costa Rica games with Sterling, Sturridge, Barkley and Henderson justifying their places and offering realistic hope that qualification from the group is still attainable.

If England can tighten up in defence (especially from set pieces), play Sterling out wide rather than through the centre and utilise Ross Barkley’s skills the second place in the group is still possible.

2. Italy’s ability to overcome injuries made them worthy winners

In contrast to Roy Hodgson’s straightforward selection, Cesare Prandelli was forced into reorganising his back four prior to a ball being kicked as a consequence of numerous injuries. Gigi Buffon’s absence was considered a major blow despite the highly rated Salvatore Sirigu taking over between the sticks.

Add to that, regular centre-back Giorgio Chiellini being forced to move across into the left back role and Torino’s Matteo Darmian earning only his second cap on the opposite flank and Italian supporters had legitimate cause for concern going up against a fleet-footed English attack.

Italy’s greatest hope of success was always likely to rest on the classy midfield of De Rossi, Pirlo, Veratti, Candreva and Marchisio. So it proved with Pirlo setting up Marchisio for a sumptuous opener and Candreva crossing for Balotelli to make it 2-1.

Prandelli’s side lived dangerously at times, especially during a high-tempo first half before Pirlo, De Rossi and Thiago Motta took control in the centre of the park and inspired the Azzuri to a deserved victory.

First place in the group is now in the Italians own hands now and Prandelli’s team look certain to achieve that goal based on Saturday night’s display.

3. The trouble with Rooney

The Manchester United striker took a long (maybe too long) time to get into Saturday night’s game, looking isolated wide on the left wing.

Rooney permitted Darmian the opportunity to get in behind left-back Leighton Baines on far too many occasions and it is little surprise to see that both of Italy’s goals originated down the right wing.

True, Rooney did provide a beautiful cross for Sturridge to fire home an equaliser but that was the United forward’s first contribution to an England World Cup goal in his ninth finals appearance.

Rooney’s continuing failure to find the net at a World Cup tournament is becoming a frustrating statistic for Roy Hodgson and the England backroom team.

He snatched his best chance on the hour mark, firing a first-time effort high and wide when there was time to take an additional touch or two. That’s the mark of a striker not in form but the bottom line is that Rooney needs to get more involved otherwise is it time for Hodgson to finally bench the former Evertonian?

4. It turned out to be a very un-Italian victory

Be honest, once the eventual winners went 1-0 up you thought the Italians would close out the rest of the game with customary defensive dourness, yeah?

Instead, we witnessed Prandelli’s team go toe-to-toe with a younger English side for much of the 90 minutes before turing to the ageless Pirlo in the closing stages to see out a deserved 2-1 win.

England’s legs went midway through the second period which was hardly surprising following their Herculean efforts in the opening half. The heat and humidity eventually sapped the last of the energy from the England players legs allowing Italy put on a master-class of possession retention to overcome England’s counter-attacking approach.

Italy won despite having less possession in the second half but more pertinently because they know better than most how to see out a game from a winning position.

5. This group is far from over

Costa Rica’s shock 3-1 defeat of Uruguay means Group D has plenty twists and turns left in it before two countries advance to the knockout phase.

Italy’s destiny is in their own hands and you would expect the Azzuri to be too powerful for the Central Americans despite their excellent win over Uruguay.

Luis Suarez looks certain to be called upon (if fit) for the Uruguayans two remaining games and how England manage to handle the Liverpool striker could prove the deciding factor in who goes through alongside Italy into the last sixteen.

That might sound harsh on Costa Rica who demonstrated admirable quality and skill in seeing off their South American opponents but neither England nor Italy will take them lightly in the group’s remaining fixtures.