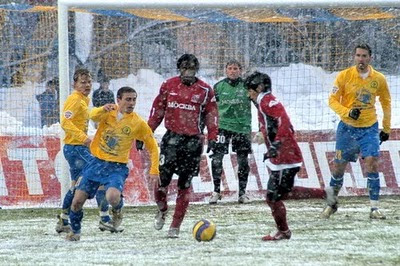 Travelling vast distances can be an arduous process. Miles upon miles pass as time seems to slow down and the destination refuses to be drawn onto the horizon. However it all seems worth it when your team strides out onto a pitch that sits so many miles away from home.

‘Mammoth’ journeys in England’s second tier sees the likes of Portsmouth head north east to Middlesbrough’s Riverside Stadium which – according to Google Maps – is a mind numbing 315 miles. ‘What the hell is the point’ would be uttered from amidst the disapproving look of one’s spouse however the scale of distance within English football is the equivalent distance of local derbies for some clubs in Russia’s First Division – which is of course an exaggeration but does go someway to conveying the problems that distance causes to clubs not exactly flush with cash.

Luch-Energiya Vladivostok are a club who must combat the problems of distance on weekly basis and yet in spite of this have managed to achieve relative success in their short history.

There are few cities that sit in a more south easterly position than Vladivostok. Located at the tip of the Golden Horn Bay in the federal district of Primorsky Krai the city is Russia’s largest port on the Pacific coast – a mere stone’s throw away from the Chinese border. It’s an impossible position for a city that sits in a nation that is so heavily weighted towards the major industrialised cities of the west. It is quite possibly impossible for any area to feel more distant from Russia’s Moscow based hub than Primorsky Krai as a grand total of 4,000 miles is not exactly a manageable distance to cover. The staggering fact that Vladivostok lies closer to areas of the USA, Canada, Thailand and India than to the Russian capital is an expression of Russia’s vast scale – and the consequent issues that it can have on the nation’s footballing infrastructure.

The prevalence of football on Russia’s eastern coast has drawn many questions as to whether the nation should bite the bullet and form regional divisions – as seen in the Second Division – which would avoid forcing teams to travel across various time zones in a journey that can see Moscow’s clubs undertake a 9 hour flight. While this option has been mooted there have rarely been serious foundations for such a split to take place – for a divide would merely worsen the already vast divide of wealth and success between the two areas. It is probably unsurprising to learn that the east has yet to be crowned champions of either the Russian Premier League or its predecessor the Soviet Top League as the focus of Russian eyes have been primarily placed on the nation’s capital and its surrounding industrial cities.

Igor Akinfeev once made a scathing comment about Vladivostok – in the wake of CSKA Moscow’s 4-0 defeat at the hands of Luch-Energiya – about the club’s closer proximity to Japan than Moscow and as such they should participate in the Japanese J-League as opposed to the Russian Premier League. His comments may have been in jest amid disappointment but they do hold significance when you assess just what the club has managed to achieve over its two decade history. The very fact that Luch-Energiya have managed to haul themselves up the ladder of Russian football to the point where they are able to participate in a league match against the likes of CSKA Moscow deserves immense credit. The issue of distance works both ways and while Akinfeev may not appreciate the idea of travelling such distances to play a single league match Luch-Energiya’s players must do so on a bi-weekly basis.

But despite the obvious issues of distance that hamper the club’s progression there are infrastructural weaknesses that need rectifying if progression is to be achieved. While various clubs in the European portion of Russia look forward to reaping the rewards of the World Cup in 2018 – the city of Vladivostok lives in fear of being left in the doldrums. The heavily concentrated nature of the World Cup host cities means that the east will not directly witness the erection of new stadia or bare the fruits of heavily improved training facilities – two significant issues that Luch-Energiya have been battling for for the best part of half a decade. In 2006 the club’s director Anatoli Beznyak said that ‘If we can implement a new infrastructure within a year, it will be a real breakthrough for us… We need to rebuild the arena in Vladivostok and develop the club base first of all.’ However in the following years the club’s Dynamo Stadium remains the dilapidated structure that it always way while the training facilities remain poor in comparison to other club’s with the First Division. Without the prospect of Premier League football on the horizon the issue of infrastructural progression do not look like being solved any time soon as deterioration threatens to send the club even further down Russia’s footballing ladder.

It is hoped that the return of Sergei Pavlov – the man who led Luch-Energiya to the Premier League – may be able to repeat the fortunes of previous years. The club’s foreign experiment with Spaniard Francisco Arcos in charge of proceedings did not heed the necessary results and as such a return to tried and tested was a sensible move by the board of directors. The lure of the west initially proved too strong for Pavlov who left the club to take charge of Kuban Krasnodar however his return expresses that the grass is not always greener – despite the more manageable proximity to opponents. Pavlov’s return it is hoped will be able to reverse the fortunes of both the coach and the club itself for neither have been dressed in glory over recent years.

So when you’re sat in a car, train carriage or coach travelling the couple of hundred miles or so between football grounds across the country just spare a thought for the Luch-Energiya squad who must undertake a trip of thousands of miles to visit even their closest neighbours. The 315 miles between Portsmouth and Middlesbrough is a mere stroll for those from Vladivostok.