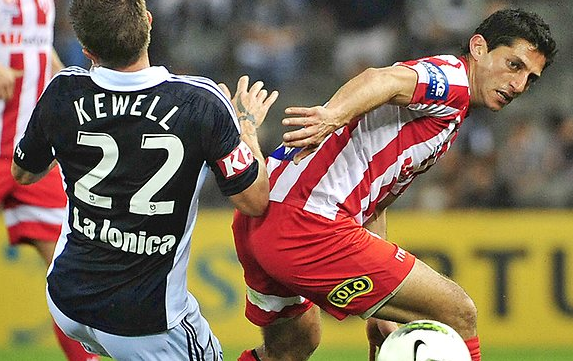 It’s been six weeks since the previous musings instalment and a lot has happened in that time. Manager upheaval, records broken and most importantly some great football has been played. This is good news as the standard was poor at the beginning of the season. Now most teams have settled their line-ups and style of play. The beauty of the A-League is that there is a small quality gap between the top and bottom teams which makes for a close competition.

Let’s take a look at each club and summarise their season thus far:

So far so good for the Mariners.  After a slow start the team got into a groove and churned out result after result.  The appeal of the Mariners is that there are no stars in the side. No big egos. No big earners. Graham Arnold has improved his side from last season and is developing future stars.  However, there are some challenges. The team’s leading goal scorer Matt Simon has left for K-League side Chunnam Dragons for a paltry $250,000. A figure around twice as much should have been more acceptable. It will be interesting to see how Central Coast cover Simon’s loss as he was instrumental in holding up play and linking possession across the field. He was also a consistent scorer. Replacing Simon in the squad is young gun Tomas Rogic. Rogic, an attacking midfielder, was one of 8 players worldwide offered a place in the Nike Academy. He then signed with Reading but was forced to return to Australia due to work permit issues. One to watch.

What a rollercoaster. Brisbane set the Australian record for consecutive unbeaten matches in a national competition. With the record broken the side then set about creating a record for successive defeats. This didn’t come to fruition and the ship appears to have been steadied. The free scoring Roar has simply lost its mojo since November. The movement has slowed, the work rate has decreased, key players have been injured and uncharacteristic mistakes have set in. Thomas Broich, recently voted the A-League’s best ever import, makes his comeback this weekend after a prolonged battle with injury. His absence from the side coincided with the form slump which suggests just how important he is to the side. Excitable Albanian striker Beshart Berisha hasn’t scored since the Roar has started losing (despite being the league’s top scorer) and surely must shoulder some of the blame. Brisbane are no longer top dogs and no longer favourites for the title. Despite this, write them off at your peril.

The surprise packet of the season. Scoring was an issue in the early rounds but youngsters Mate Dugandzic and Eli Balbalj have stepped up and made telling contributions. The Heart is a young team and although they have been naïve on occasion, their enthusiasm and work rate has seen them earn some great results. Goalkeeper Clint Bolton has been nothing short of brilliant and his experience has held the backline together. Manager John Van’t Schip deserves a lot of credit for sticking to his principles and educating his side to play a possession based game with high levels of movement and off the ball running. Melbourne Heart is great to watch.  It remains to be seen whether they can continue their form into the finals and make an impact. One would expect the Mariners and the Roar to have too much nous to overcome them but they are capable. With the transfer window open an experienced striker would be ideal to assist them in continuing their impressive form.

The wildcard of the competition. The New Zealand club have an outstanding home record. Equally, their away form is dreadful. Fortunately the home form is good enough to nestle them in fourth place, just ahead of the pack. The Kiwi medics have been hard at work looking after this side as they’ve had dreadful luck with injuries.  However, more players are now coming back in than going out and consistency is beginning to follow. Manager Rick Herbert reads a game as good as any in the competition and has made many game changing substitutions.  Paul Ifill is the creative genius of the side and is stringing together some game time after an injury riddled start.  If they can improve on their paltry 2 away points there is every chance Wellington can make a serious impact on the post season.

The comeback kings. Sydney has won more games after going a goal down than they have won from scoring first. This is just another facet that is the enigma of Sydney FC. The blend of experienced and youth players are there. The manager knows how to win the league.  But, it’s just not clicking. The problem is pace. For a side that’s set up to counterattack, there isn’t enough speed within the squad to take advantage of potential opportunities. Bruno Cazarine has been imported from Brazil. Surely there are strikers playing in the NSWPL that are just as good if not better than him as he just isn’t cutting it. None of the Sydney players has scored more than 3 goals. None of the Sydney players has more than 3 assists. The defence has been porous and indisciplined. Despite all this, they’ve scrambled enough results to remain in contention. Like the Phoenix, if the Sky Blues can come good at the business end of the season then the mentality of the team suggests the side can go close. It’s unlikely, but not impossible.

The busty blonde of the league, i.e. top heavy. The Victory has the best array of attacking talent in the competition. Yet the goals aren’t flowing. The Victory also has a porous defence.  There was only one way to solve this situation- sack the coach. Jim Magilton this week takes over from Mehmet Durakovich and has a tough but ultimately rewarding task on his hands. Having been appointed on a caretaker basis Magilton needs to organise the defence and fire up the attack. If he can find the right blend he should be immediately rewarded as there is no doubt the Victory has the best playing roster in the league. Ante Covic has been absolutely brilliant making more saves than any other keeper, despite missing a couple of games. If the rest of the squad can rise to Covic’s level, the sky is the limit.

The ugly duckling of the competition. Perth got off to a blinding start to the season putting a string of good results together.  However, the strategy of “give the ball to Shane Smeltz in space” came a cropper when the Kiwi striker got injured. Unfortunately there was no Plan B. This is a harsh assessment but it’s not too far away from the truth.  The Glory is hard to pin down and determine a playing philosophy. There is a good squad of individuals with the ability to turn a game on its head. Liam Miller, Travis Dodd and of course Shane Smeltz have all made an impact and won matches for Perth. But the goals haven’t been consistent and have been few and far between. 16 goals from 15 games isn’t title winning form. Perth is treading water this season which is a shame as the club has a fantastic history of success. Perhaps a new manager would make a difference…

The turnaround is on!! Perth take note. The Reds dumped underperforming manager Remi Coolen after a disastrous run of results and the leakiest defence in the league.  John Kosmina has stepped in and made an immediate impact on results. The word out of Adelaide is that Kosmina has taken things back to basics and put the square pegs in square holes by selecting players in their preferred position. Squad players who weren’t getting a start are now getting a look in. Whilst this has turned things around for Adelaide it remains to be seen whether the Reds can maintain the form and make a charge for the finals and continue into next season. History has shown that Kosmina doesn’t have a track record of sustained success. However, the current side is getting results and should make a late charge for the finals. The playing stocks are good enough to go all the way, but it’s unlikely this will occur. One thing is for sure. With Kossie at the helm it promises to be an entertaining ride!

Watch this space next season. Newcastle took to Week 1 by sacking manager Branko Culina. Gary Van Egmond has taken over and set about developing a playing philosophy similar to the Brisbane Roar. This is to be applauded. The down side of this is that the playing squad isn’t totally suited to this playing style and it will take a while to “bed in”. There is no doubt this has had an adverse effect on results as long term gain has taken precedence over short term pain. Newcastle is terrible away from home gaining just 1 point in a nil-all draw against Adelaide in Week 8. There are signs that the plan is coming together. However, the playing stock is not strong enough for the Jets to make a finals impact. Jeremy Brockie has put in some star performances but has been anonymous in others. Ben Kennedy is the poorest goalkeeper in the league and defender Nikolai Topor-Stanley just doesn’t suit the new system. Judging by the lack of transfer activity it appears that Van Egmond is sticking with the current squad and any signings will be made next season. Until then, keep an eye on the quality of passing and look for improvement.

Good but ultimately not good enough. If ladder position were decided by goal difference Gold Coast would be in the top 6. Instead, they are rock bottom – 4 points away from a place befitting their goal difference. Despite their position United have shown glimpses of what could be. There are some good players in this side, and they have played attractive entertaining football but a combination of bad luck and clumsy defending has cost them dearly. A poor 5 minute spell in matches has undone a lot of good work.  A playmaker up front to add some structure and flair to their attack would make a world of difference. James Brown up front has been a revelation with some quality strikes. Ben Halloran has shown that he is one for the future. If manager Miron Bleiberg gets his wish and one or two players are added to the squad there is potential for the Gold Coast to move up the ladder. For now though, they are last and probably deserve to be. Miron Bleiberg commented at the beginning of the season that anyone betting on United finishing with the wooden spoon would be wasting their money. At the moment it looks like a good bet.