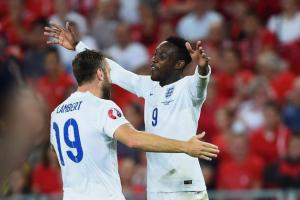 After the 2014 World Cup in Brazil, there is no secret that England have to do something differently in these two years in order to not have another disappointing tournament in which England underachieve again. I believe that there are many things that England and the FA can do in order to change the nation’s fortunes in the next two years.

For example, Stewart Downing has not really lived up to his potential out wide. Downing has been playing at the top of the diamond for West Ham and has been excelling in this position. Maybe Roy Hodgson could implement this to his team! Perhaps Stewart Downing could become a key playmaker! As much as it might sound ridiculous, I strongly agree that the Premier League does have the solutions to certain puzzles that England face.

I believe that Roy Hodgson is already making the right steps. We are seeing Jordan Henderson  and Raheem Sterling playing similar roles that they usually play for Liverpool solving the problem of low tempo that England have been faced with. We have also recently seen Fabian Delph start for England in the box-to-box role he plays for Aston Villa telling fans that there is hope after the retirement of Steven Gerrard and Frank Lampard.

Eric Dier is English and has been impressing pundits and fans alike. Does he deserve a starting position in the England XI? He could be England’s utility defender, playing across all of the back four.  If Roy Hodgson decides to copy good things that Premier League clubs do it most definitely will help England solve the many problems that face them.

Secondly, England need to find an identity. A way of playing. Many of the great national teams of all time had a way of playing and this style of play is imposed on the national youth teams. This sense of an identity will provide England with continuity if they set up right.

So, how do you give a national team an identity? Most national teams are resourceful. They use what they have and shape the way they play around the players and the abilities they have. England have fast wingers and full-backs that have a direct style of dribbling. Take for instance, Danny Rose, Kyle Walker, Raheem Sterling and Alex-Oxlade Chamberlain. England also have strong, physical centre-backs like Cahill and Jagielka  and tough-tackling, box-to-box midfielders where the often mentioned Fabian Delph comes to mind. With Lambert, Welbeck, Rooney and Sturridge as strikers, England have a wide variety up front.

The type of players England have suit a counter-attacking, direct style of football. With midfielders that win the ball back and quick wide players and many types of strikers, England on the counter-attack would look very dangerous and threatening. With strong physical-centre backs, England need to be set-piece specialists. By playing to their strengths, not only will England have a better chance of performing well, but they will also have a style of play that they can consistently play and there will be less experimenting.

In order to keep continuity, Germany have an excellent set up. The group of players that have just won the World Cup, had been playing together since the U21’s. This group of players have grown to know each other and bond. The management set up is interesting. Germany tend to have German managers and Joachim Low took over from Jurgen Klinsmann after being Klinsmann’s assistant manager for a while.

If England used this system continuously each manager will have an idea about how the team works and will be familiar with the players and the tactics and this will take away “transition” periods. This part of building a team identity is more of a long-term goal but can still be applied very easily.

At the end of the day, you are the fans and you are the ones with the real voice. Go out there at make it heard.