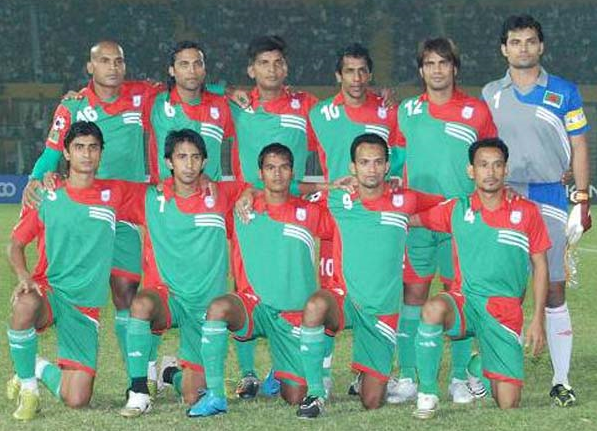 I had not been this exuberant for quite a long time. I was gripped with anticipation and the excitement before the first leg kick-off was palpable. Time seemed to pass at an incredibly slow rate when all of a sudden a few memorable scenes flashed through my mind.

My favourite memory of watching Bangladesh in football was way back in 2003 in the South Asian Football Federation (SAFF) Championship held in the capital city of Dhaka. After a comfortable group phase, Bangladesh faced the daunting challenge of defending champions India in the semi-final.

A spectacular long-range goal from Motiur Munna in extra time booked Bangladesh’s place in the final. Maldives awaited in the final. In front of a packed crowd and under the floodlights at the beautiful Bangabandhu National Stadium, Bangladesh achieved its finest moment in football history that night. A dramatic nerve-wracking penalty shootout victory secured their first ever SAFF title.

I was only 11 then but the memories are still fresh.

The 2014 FIFA World Cup Brazil may be months away but for sixteen lowly-ranked teams in the Asian zone, the road to Brazil commenced on Wednesday evening. And already the World Cup dreams are in tatters for a few of those teams. But for Bangladesh, a country where prosperity and poverty are next-door neighbours, the improbable dream is truly alive!

Bangladesh has never qualified for the FIFA World Cup. Their experiences in World Cup pre-qualifying rounds have been acrimonious. They had fallen in the first round hurdle each time. And when the draw for the first round of qualification for the 2014 World Cup was made earlier in March this year, I was, to be honest, relieved to a certain extent that Bangladesh had not drawn Tajikistan.

In the preliminary round of qualifiers for Germany 2006, Tajikistan cruised past Bangladesh with a 4-0 aggregate win.

Four years later, they met again at the same stage. And this time, the outcome was worse for the South Asian nation. After drawing the first leg 1-1 at home and giving themselves and their fans a scintilla of hope, they were trounced 5-0 in Tajikistan in the return leg which ended their unlikely dream of mixing it with the top teams in South Africa.

The draw this time pitted Bangladesh against a familiar South Asian country. The team standing between Bangladesh and a place in the second preliminary round were old foes Pakistan – a country with which they share so much of history. In 1971, one of the worst genocides in history took place. After nine months of war, struggle and bloodshed, Bangladesh, then known as East Pakistan, separated from West Pakistan and gained independence. The atrocities have not been forgotten.

Bangladesh had a solid record at home against their rivals. Since 1985, they had never lost to Pakistan on their own turf. The overall record was even though with each team notching up five victories.

The build up to the first leg in Dhaka, unsurprisingly, was not devoid of any controversy. For security reasons, the Bangladesh Football Federation (BFF) wanted the second leg to be played in Dhaka too. The FIFA denied their request.

There was another major reason for concern for Bangladesh. Former coach Robert Rubcic left at the start of the June over a pay dispute.  He was replaced by the Macedonian Gjorgji Jovanovski but because of fears of security, Jovanovski did not want to travel to Pakistan for the second leg. So, the BFF was in search for the team’s third coach in just a few weeks’ time and ultimately the entire drama ended when they finally settled down with another Macedonian – Nikola Ilievski, just days before the match.

Ilievski represented Yugoslavia in the early 1980s and was the head coach of the Macedonia national team for a brief period. He was in charge of the team that drew 2-2 against England at St Mary’s stadium in 2002. Remember the Macedonian goal direct from the corner that night?

When the squad for the match was announced, a surprise inclusion had everyone excited and I was no exception. Denmark-born Bangladesh footballer Jamal Bhuiyan who plies his trade for a second-division Danish team became the first Europe-based player to earn a call-up to the national team. The ever optimist in me was hoping he would put in a Michael Laudrup-esque show. However I was left down-hearted when passport-related problems denied Bhuiyan the opportunity to be a part of the match-day squad.

Cricket in Bangladesh is the most popular sport. It would be near impossible to find anyone here who has never swung a willow at a round shaped ball.

Football is popular, too. The World Cup every four years is celebrated with an incredible fervour and passion. But the national team performances have been consistently well below par. In a fascinating piece on IBWM a few months back which is definitely worth a read, Quazi Zulqarnain Islam talked of the problems in details associated with football in the poverty-stricken country.

A voice outside woke me up from my day-dream. And now time began to pass much faster. It was almost close to kick off. The nerves were kicking in.

On a rain-soaked evening, the two teams came out to the pitch for this important South-Asian derby. The playing conditions were hampered by the persistent rain. It was not the best of pitches to play football.

The attendance was considerably low. The heavy rain was one of the reasons. Some might have fallen victims to the nightmarish traffic in the boisterous and bustling city of Dhaka. But those who braved the rain and turned out to watch their beloved team were not left disappointed.

Within thirty-eight seconds of the start of the match, they were already celebrating with joy when striker Zahid Hasan Emily fired home a header to put Bangladesh in front. Almost half-way through the first half, Zahid Hossain doubled their lead with a well-taken shot. Zahid sliding down on his knees to celebrate the goal was my personal favourite moment of the match. A flurry of Bangladesh attacks followed but it ended 2-0 at half-time.

The pattern was similar in the second half. Bangladesh continued to dominate the possession. A third goal was waiting to happen. And ten minutes after the restart, a fine Bangladesh counter-attack led to the inevitable third goal. It was the best goal of the evening. Rezaul Karim, after a brilliant ball from the back had caught out the Pakistan defence, expertly curled his left-footed shot into the top corner of the net.

They had a few more chances to extend their lead but there were no more goals in the match. 3-0 was more than a satisfactory result to take to Lahore in the return leg on Sunday, July 3.

On Sunday, all Bangladesh has to do is avoid a convincing defeat to advance to the second preliminary round. A battle against Lebanon at the end of July will then decide who progresses to the third round to face the likes of South Korea, Japan or Australia.

For now, the focus is only on Sunday’s match. History beckons for the team.

Argentina is set to play Nigeria in an exhibition match in Dhaka this Septemeber. The best player on the planet embracing the football pitch of the Bangabandhu National Stadium will be a moment to savour for every soul of the country.

The optimist in me is praying these would prove to be the catalyst required to turn around the fortunes of football in Bangladesh. This could be the most important time for football in the country.

“Dreams are free, so free your dreams.”  – Astrid Alauda

We can all dream, can’t we?

Economics Student. A Man United fanatic. An aficionado of statistics. And I enjoy writing.

9 thoughts on “Chasing The Dream”