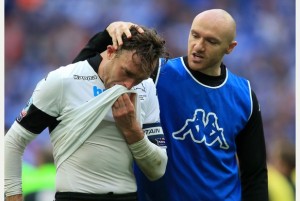 Let this story serve as a reminder to anyone who still believes in the myth of the “beautiful game”. There are no happy endings, only disappointment. Disappointment that makes you question exactly why you follow football to such enthusiastic lengths when at the end of that nine-month road of optimism lies nothing but disenchantment, frustration and regret.

Football is a parasite that feeds on hope and leaves you nursing the worst pain you’ve ever felt…only when it’s finished working its way through everything good you’ve ever known.

Sound extreme? I once believed in football. That was before March turned to April in 2014.

Derby County had convinced me of their promotion credentials long before that. A hard-fought 1-0 win over big-spending Queens Park Rangers at the iPro Stadium in early February emphasised the progress the side had made under Steve McClaren. The free-scoring Rams had proved themselves capable of grinding out those tough one-goal victories all promotion-chasing sides need and suddenly, hope of a top-six finish became a rush for the automatics. There was a belief around the iPro not felt in over a decade.

“This is it”, I thought to myself as the final whistle blew at the iPro. “Derby will get promoted to the Premier League this season. I can feel it!”

Just down the A38 things were going similarly well. Burton Albion had not been out of the playoff spots in 2014 and I was privileged enough to commentate on several games during the Brewers’ run-in for BBC Radio Derby, a genuine dream come true and the absolute personal highlight of this season. The one game that stuck out was at the Kassam Stadium, where Burton beat Oxford United 2-1 on March 8th.

The Brewers put the hosts under pressure early, scoring two excellent goals on the counter through Dominic Knowles and Zeli Ismail. Despite Ryan Williams grabbing one back for the Us in the second half, the Brewers never looked like losing. They had the distinct air of a team playing with confidence under a forward-thinking manager, determined to put the playoff disappointment of the previous season behind them.

“This is it,” I thought to myself as the final whistle blew at the Kassam. “Burton will get promoted to League One this season. I can feel it!”

When I wasn’t commentating on Burton games I would be following Derbyshire’s top non-league side Alfreton Town across the country, covering games for the BBC and relishing every moment. Despite reverting to part-time status before the season began, Nicky Law’s reassembled squad lay third in the Conference Premier table despite having a budget well within the bottom five of the division.

Relegation-threatened Tamworth were the visitors to the Impact Arena on March 18th and despite taking the lead twice, they proved no match for the character and creativity of Law’s mighty Reds. Goals from Shaun Harrad, Tom Shaw, John Akinde and Paul Clayton gave Alfreton a deserved 4-2 win and took them to within two points of second-placed Cambridge. The Reds had a six-point cushion inside the playoff spots. “Little old Alfreton” were on the verge of the Football League for the first time.

“This is it,” I thought to myself as the final whistle blew at the Impact. “Alfreton will get promoted to League Two this season. I can feel it!”

This was exhilarating. The entire region believed that the Rams, Brewers & Reds were set for a fruitful end to the 2013/14 season…a feeling that extended to Merseyside. I’ve had a soft-spot for the red side of Stanley Park ever since I watched the 2006 FA Cup Final with a good friend and, with my other half an ardent Scouser, the tie has only strengthened since.

Under Brendan Rodgers, Liverpool were starting to believe. “We’re gonna win the league” the fans chanted on March 30th. In Rodgers they trust. Liverpool duly went top of the Premiership with a 4-0 demolition of Tottenham Hotspur. They would go on to defeat Manchester City a few short weeks later. “Now you’re gonna believe us” was the cry.

“This is it,” I thought to myself as the final whistle blew at Anfield. “Liverpool will win the Premier League for the first time. I can feel it!”

Football had built me up. I hadn’t felt so in love with the beautiful game before. That parasite had worked its way into my thinking.

But football was ready to knock me down quicker than George Groves and with half the grace.

Alfreton were the first to falter. The squad was tiring. Injuries were piling up. There’s only so much a manager and his squad can do with a modicum of the budget of their playoff rivals. A fatal 2-1 defeat away at Woking put paid to the Reds’ hopes of becoming the smallest ever club to compete in the Football League. In their final eight games, Alfreton took just three points and finished 11th (still their highest ever league position).

“But it’s ok,” I thought to myself. “Liverpool will still win the Premier League for the first time. I can feel it!”

The league title was in Liverpool’s hands, after all. They had it in their grasp. Steven Gerrard had one shot, one opportunity, to seize everything he ever wanted.

He didn’t capture it. He let it slip.

Liverpool capitulated. Gerrard’s error allowed Demba Ba through on goal and the Reds lost to Chelsea in front of an expectant Anfield. Liverpool, so comprehensive and flamboyant in their attack, were exposed for Rodgers’ lack of an effective plan B. Their title hopes were over and Manchester City won their last five games to take the league by two points. Merseyside still waits.

“But it’s ok,” I thought to myself. “Derby have made the playoff final and they will earn promotion to the Premier League. I can feel it!”

I should have seen it coming. Even on the morning of May 24th 2014 it was all going Pete Tong. The bacon sandwich from the bus station tasted slightly less appealing than the napkin it was wrapped in. Our bus driver took a Lewis Hamilton approach to the brakes of his double-decker vehicle and forgot where the coach park was. I soon heard Hamilton himself had been cheated out of pole position in Monaco qualifying.

We didn’t falter in our support. We cheered the lads on regardless. Today would be our day. The disappointment of Alfreton and Liverpool would not enter my mind. A win against QPR earlier in the season had affirmed my belief that Derby would win promotion and it was Harry Redknapp’s men who stood in the way of glory.

George Thorne ran the show from midfield with Will Hughes a constant danger ahead of him. Johnny Russell turned in one of his finest performances in a black and white shirt. Jake Buxton, our captain, leader and legend, was heroic at centre-half. The Rams peppered Rob Green’s goal with attempt after attempt but couldn’t find a way past England’s last number-one choice for a World Cup. Richard Dunne’s last-ditch tackles on Martin, Bryson and Ward were a sight to behold. It could, and should, have been a 3-0 win.

“But it’s ok,” I thought to myself. “Burton have made the playoff final and they will earn promotion to League One. I can feel it!”

Marcus Holness was inspirational at the back and Lee Bell was faultless in midfield. It had to go Burton’s way. It had to. There was no other choice now. And the Brewers were looking good, getting the ball forward effectively. Gary Rowett utilised Zeli Ismail effectively off the bench and put faith in Billy Kee’s deceptive strength against the centre-halves. Dean Lyness kept Burton in it with some outstanding saves…then he came out too far to collect a relatively dangerous freekick.

He missed the ball.

It went into the net that Derby had unsuccessfully assaulted 48 hours earlier.

In the space of a month, what could have been the greatest football season of all time had turned into a nightmare from which I fear I’ll never awake. I keep seeing Zamora toe-poke a loose ball past Lee Grant in the 90th minute. I visualise Steven Gerrard’s slip two or three times a day and work out fifty different scenarios in which it could have gone differently. I see the disappointment on Gary Rowett’s face at the final whistle at Wembley. I think of the inspirational efforts of Alfreton Town’s record-setting squad and how part-time status caught up just early enough to derail their playoff efforts.

Hopefully 2015/16 will provide some relief from the horrendous kick in the balls this season turned out to be for everyone involved. It’s a horrible game. Football doesn’t allow you the luxury of sustained success. Success is fleeting. The pain of losing at Wembley never subsides.

“But it’s ok,” I keep thinking to myself. “England start their World Cup campaign in just under a fortnight and they’ll win the whole damn thing. I can feel it!”