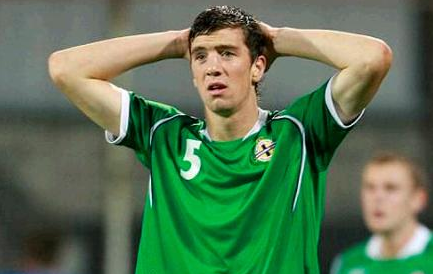 Before he resorted to petty, infantile insults and blocked me on Twitter recently, I stood accused of being a supporter of “football apartheid in Ireland” by the spokesman and chairman of the Amalgamation of Northern Ireland Supporters Clubs, Gary McAllister, after I had made fruitless attempts to debate the matter of Irish player eligibility with him via the medium in entirely good faith.

“Football Apartheid in Ireland” is a somewhat melodramatic, and downright fallacious, backronym of FAI – of course, the FAI acronym actually stands for the Football Association of Ireland – manufactured by malcontent Northern Ireland football fans who disagree with the eligibility of Irish nationals (as of birthright) born in Northern Ireland to play for the FAI. They seek to highlight their cause through the use of emotive language and the concealment behind a convenient mask of apparent social concern of what is actually mere self-interest. For what right-thinking person could actually advocate such ludicrous concepts as football apartheid or bad community relations, after all?!…

Their scaremongering, disingenuousness and misrepresentation attempts to convince not just the footballing fraternity that the FAI’s selection of these eligible Irish nationals is a concerted sectarian policy that will ultimately lead to an all-Protestant IFA team and an all-Catholic FAI team. They seek to establish their cause as an issue of significant general socio-political concern in spite of the naïve retort-cum-mantra they direct at those who support the right of northern-born Irish nationals to declare for the FAI: “Keep politics out of football!”

What they are really saying is: “Keep your politics out of what we think is our football!”

There are a number of problems with the general theory that the FAI are promoting “football apartheid in Ireland”. Despite northern-born Irish nationals having been eligible to play for the FAI since 1956, IFA teams have never been bereft of Catholic players willing to line out for them, for whatever reason. Martin O’Neill played for Northern Ireland in his playing days and the likes of Paddy McCourt and self-confessed Republic of Ireland supporter Niall McGinn similarly do so in contemporary times. They are neither rare nor exceptional cases, nor is there any indication or evidence to suggest that players from similar backgrounds will, for some reason, make a sudden, or even gradual, en masse decision to simply stop lining out for the IFA in the future.

Likewise, the Republic of Ireland team is not an all-Catholic outfit, nor has it ever been. The innuendo behind the backronym insinuates a sectarian selection policy on the part of the FAI; that they will facilitate and select only players from Catholic backgrounds. Of course, this could not be further from the truth. Irish nationals with shared heritages as diverse as Turko-German, Maghrebi Arab, Muslim, Nigerian and indeed Ulster Protestant have all been happily facilitated by the FAI; the likes of Selcuk Tidim, Éamon Zayed, Samir Carruthers, Lanre Oyebanjo and Alan Kernaghan all catered for without problem.

If Protestants from north of the border were willing and good enough to play for the FAI, the FAI would undoubtedly facilitate any desires they might harbour. A mix-up in cause and effect on the part of Northern Ireland fans is evident here. The reason northern Protestants do not tend to feature in FAI teams is not because of any sectarian policy or refusal to select them, but, rather, due to the very obvious socio-political reality; most northern Protestants tend to be of a general unionist persuasion. Consequently, they will possess no cultural affinity with the FAI who represent the independent Irish national identity rather than the regional British or Northern Irish one with which they identify. The latter identity is channelled through the IFA, of course.

There is nothing the FAI can do if a player is not interested in playing for them. Indeed, the FAI can only select players who are willing to volunteer their services to the association. It is not as if they kidnap or intimidate players from Catholic backgrounds in order to force them into doing something they do not want to do, so comparisons with the rather aggressive notion of poaching are similarly misguided.

Some Northern Ireland fans who bark about “football apartheid in Ireland” will try and convince those willing to listen that they are not actually intolerant individuals. They will try and claim that their problem is not with northern nationalists identifying as Irish at all, but, rather, with players participating in the IFA’s youth set-ups prior to switching to the FAI. This seems to contradict their former protestations and so I find such claims of tolerance to be unconvincing. For the sake of argument, if the situation as it is did indeed cause “football apartheid in Ireland”, depriving players of a switch of association would not nullify or limit the possibility of “apartheid” any more so than allowing players a switch of association would; Irish nationals born north of the border would still be entitled to exercise the option of declaring for the FAI. In the interests of logical consistency, those protesting “football apartheid in Ireland” would have to oppose any facilitation for northern-born Irish nationals by the FAI, whether they had already participated in an IFA youth set-up or not. So, this appeal is exposed as sham logic or a veneer ultimately rooted in an intolerance and unwillingness to acknowledge the valid and legitimate national identity of the nationalist community. Either that or it is, at best, pig ignorance.

If some Northern Ireland supporters are genuinely so intent on ridding the island of Ireland of “football apartheid”, they might be better devoting their energies to promoting the amalgamation of the island’s two associations to form a single, all-island team. Not that I am necessarily an advocate of such myself under current circumstances, but, y’know, I’m just saying… Of course, they will complain that such a development would dilute their identity, which is a fair and understandable point, but why the double standard and lack of self-awareness then when it comes to their moralising over nationalists wishing to express their national identity by declaring for the FAI?

Northern Ireland fans also attempt to distinguish morally the selection activities of the IFA and the FAI. It is argued that the problem with the FAI is that they are happy to select players who are still of value to other associations whilst the IFA would never do such thing. Of course, any estimation of the value or future worth of a particular player to an association, save in the case of an actual statement of disinterest on the part of the association concerned, would be completely subjective speculation. Who is to say that the FAI ever deemed Alex Bruce or Johnny Gorman surplus to requirements before the IFA entertained them, for example? Did Canada Soccer ever state Caolan Lavery was surplus to their requirements before he switched to the IFA? Who is to say that a future England goalkeeping crisis would not have seen Lee Camp recalled to the England set-up at some point were it not for his switch to the IFA? Worse; the IFA actively seek out players currently registered with other associations with little protest from the hypocrites within their fan-base who go as far to laud such endeavours as progressive. As the IFA’s Elite Player Mentor, Gerry Armstrong has been making it his business to get in contact with the likes of Anton Rodgers (currently registered with the FAI) and Connor Wickham (currently registered with the FA) with the ultimate aim of convincing them that their international futures lie with the IFA, for whom they also happen to be eligible.

Anyhow, whilst both associations behave in the exact same manner in facilitating or even encouraging the movement of dual nationals towards their respective teams (although the FAI officially deny making any initial approaches in relation to northern-born Irish nationals), it is not as if there is necessarily something morally wrong with that anyway. The rules are there to provide players and associations with rights. If players and associations seek to exercise these rights and one has a problem with this, they ought to take it up with those who accord these rights, or FIFA, in other words.

And just one final point; northern-born Irish nationals who declare for the FAI do not do so because they are bitter or sectarian either, contrary to frequent accusations to which the likes of Shane Duffy or James McClean were subjected. Likewise, neither I nor the northern side of my family have any interest in supporting Northern Ireland. It’s not because we are bitter or militantly set on the immediate destruction of the IFA or Northern Ireland as a political entity. Rather, it’s because our Irish identity – the independent national one – is channelled not through that entity, but, rather, through the Irish nation state and, by extension, the FAI. Thus, it is not that the IFA are our enemies; it is simply that the IFA are a cultural irrelevance to us, just as the Scottish, English or Welsh associations are an irrelevance to us. That does not mean we bear them any harm or ill will. Similarly, what anthem and symbols the IFA choose to play under is of no concern to me whatsoever. It will neither offend me nor will it ever encourage me to view them as representative of my identity. My identity is represented elsewhere.

8 thoughts on ““Football Apartheid in Ireland”, Misrepresentation and Bogus Moralising”